KANGAR, Nov 18 — Barisan Nasional (BN) may lose its command of Perlis for dropping the popular Datuk Seri Shahidan Kassim from its 15th general election (GE15) line-up, ending its over six decades of unbroken power over the state.

Voters polled by Malay Mail said they were already unhappy with the way Umno is run and have lost faith in BN, which had the state as its stronghold with nearly 195,000 registered voters in three Parliamentary seats and 15 state assembly seats.

“These guys bring new meaning to the word invisible. Once in five years they appear,” the 62-year-old said. “Then after we vote, poof, missing again. I’m a vendor, have problems like everyone else but how come I can see the other candidates here more often?

“This time it’s my chance to make a difference so I will go with Cikgu Zakaria from Perikatan Nasional (PN). He’s kind, generous and a local. His father also has a shop selling ‘kuih’ and sorts so if he wins good for me,“ she added, referring to Azhari Yahya who is contesting the Bintong, one of the state seats under Kangar.

Rahzaali Muhar Nick, 42, had just finished Friday prayers and was buying lunch. He heard Malay Mail talking to Kal Bee and could not help chiming in.

“BN’s going to fall except in Arau. That is a real fort,” said the labourer.

“My friends also think the same. Can’t take the drama. I mean did anyone talk about the people, or I just heard someone wanting to be prime minister?” he asked. It was the same for Mohd Humaimin, 30 and Alawie Razali, 32. Both felt Perlis as a state had digressed in the past five years.

“Perhaps someone new can make a difference here because only recently I’ve been thinking more about the future and it’s because I never saw Umno in such disarray.”

However, Humaimin said he felt the undercurrent in Kangar is dissatisfaction towards political leaders, not their parties. Muhammad Humaimin said he felt the undercurrent in Kangar is dissatisfaction towards political leaders, not their parties. — Picture by Shafwan Zaidon

“I don’t care about the party but am wondering what the candidates are doing? I want change but honestly Arau is Shahidan’s fort if you get my drift. No one’s budging him from Arau.

“But let’s change Kangar and other places, get some excitement in the area, maybe more schools and things for the children,” he said.

Further north in Padang Besar, another Umno defector Datuk Zahidi Zainul Abidin is running as an independent after he was also dropped from BN’s GE15 ticket.

Zahidi has come out publicly denouncing Umno, and he too is confident about winning again.

Malay Mail found that not everyone is keen on the two-time incumbent, however.

“The younger generation is ready to vote a new party and candidate in, it’s the older generation who are too ‘kampung’ with their thinking.

“They are narrow-minded, vote on racial grounds only and can never see the big picture. This we worry may influence the younger generation,” said Eddie Faizal Hamdi, who has resided in Padang Besar for a decade. “My shop is frequented by many of the village folks and some even ask me my political affiliation before they eat,” said the food stall owner.

“This is crazy to me. But I feel for Zahidi it’s going to be tough to win again because he isn’t really here much.”

Eddie’s wife Norizawati felt the same, pointing to the vast difference between Penang and Perlis’ economies.

“Penang has ample facilities, public transport and so on, but here the past 10 years have been at a standstill. Nothing’s up, public transport is non-existent. Even the schools here feel like they’re behind the other states.

“Teachers in Felda, for example, have been there for years and there is no life, no energy they are just going through the motions,” she told Malay Mail, referring to the Federal Land Development Authority estates.

“I feel people have woken up and hope we get to see some changes after GE15,” she added. 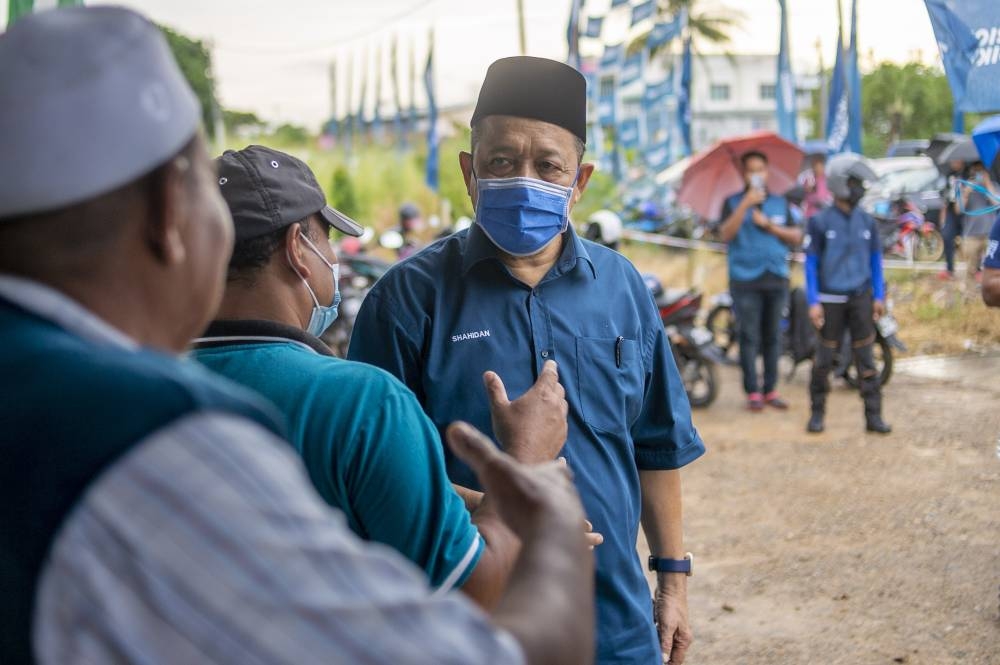 Shahidan was dropped by Umno president Datuk Seri Ahmad Zahid Hamidi from the GE15 ticket and decided to take matters into his own hands.

He defected and joined Perikatan Nasional to compete in Arau. Today, he took a shot at his former party Umno stating the party had fallen behind in the opinion polls to third place — which he said would persist as Umno and BN have fallen far from their roots.

“Even if they say PH is leading, we’re the one who is leading because support for Perikatan Nasional is more than 50 per cent,” he told about 300 people who came for a “ceramah” at Beseri here.

“Malays comprise 70 per cent of the population the remaining 30 is non-Malays so the Merdeka Center’s report has some errors,” he said, pointing to a recent survey.

Shahidan said PH actually has the support of 90 per cent of the non-Malay votes, claiming this showed that PN is the one in the lead.

“Then behind PH comes BN, they’re in third and most likely will keep dropping,” he said to loud cheers from the crowd.

In April 2019, Shahidan was discharged not amounting to acquittal from a charge of molesting a minor, after the alleged victim dropped her complaint.

Shahidan had previously denied the charge and said it was all just a “misunderstanding”. He had also said that the police report lodged against him over the case had been withdrawn.

Last week, Malay Mail reported that voters in Arau were still undecided on their MP.