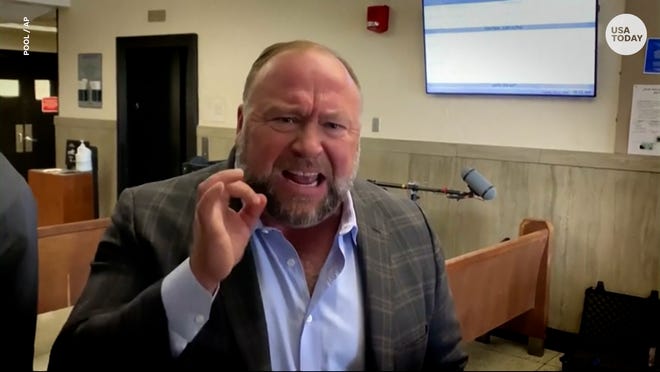 A jury in Austin, Texas, has put a price on the defamatory behavior of  Infowars founder and host Alex Jones: a total of more than $49 million in damages awarded to the parents of 6-year-old Jesse Lewis, who at the age of six was among the 20 first graders and six educators killed in the 2012 Sandy Hook Elementary School shootings in Newtown, Connecticut.

The damages, delivered by the jury Friday, were significantly less than the $150 million sought by parents Neil Heslin and Scarlett Lewis, who testified how the conspiracy theorist’s false claims that the school massacre was a hoax made their lives a “living hell” of death threats, online abuse and other trauma from Jones and his followers. And Texas law could reduce the damages further.

Is Biden making a comeback?:Jobs report and abortion fight give Dems new life

What’s next for Alex Jones?

Jones’ attorneys could appeal the damages finding, including an argument that evidence not meant for the case – two years’ worth of cellphone data – was presented to the jury. However, that argument wouldn’t likely convince a judge, John Browning, a trial lawyer and former Texas appellate justice, told Bloomberg Law.

“The fact that (Federico Andino Reynal, the lead attorney for Jones) filed this emergency motion after the testimony, it reeked of desperation,” Browning said.

Later this year, the Austin-based Jones, along with his companies including Infowars and Free Speech Systems, face trials for damages in two additional defamation lawsuits – one filed in Texas by the family of Noah Pozner, and another in Connecticut filed by eight families of Sandy Hook victims. The trial in that Connecticut case is scheduled to begin next month.

The cellphone data snafu could catch up to Jones in multiple ways, too. Mark Bankston, one of the plaintiffs’ attorneys, said the cellphone evidence suggests Jones may have committed perjury during the trial’s discovery period by being untruthful about his text messages.

Dave Aronberg, state attorney for Palm Beach County, Florida, agreed that prosecutors could possibly file perjury charges against Jones. “His legal problems are not over,” he told CNN.

What’s everyone talking about?Sign up for our trending newsletter to get the latest news of the day

Bankston also said the January 6 committee, which deposed Jones in January 2022, had requested the phone records, but he wasn’t sure the data covered the time period leading up to and after the incident. In the subpoena letter, Rep. Bennie Thompson, the Democratic chairman, has charged that Jones helped organize the Jan. 6 rally and repeatedly promoted President Trump’s false claims of election fraud.

What is Alex Jones’ net worth? Is he bankrupt?

Jones has certainly attempted to depict himself and his operation as hurting financially. In late July, Jones’ main company Free Speech Systems, the parent company of Infowars, filed for bankruptcy. That came months after three of Jones’ other companies including InfoW, which was formerly known as InfoWars, also filed for bankruptcy. During this week’s trial Jones testified that any award over $2 million would “sink us.”

But Bernard Pettingill, an economist hired by the plaintiffs, testified Jones and the company are worth up to $270 million, and that records showed Jones had withdrawn $62 million for himself in 2021. “He’s got money put in a bank account somewhere,” Pettingill said.

Opinion:Alex Jones finally faces consequences. Hateful lies have to come with a cost.

What do Sandy Hook families say about the award?

After the jury announced its decision, Scarlett Lewis said the jury held Jones accountable – and so did she.

Lewis recalled when she took the stand and looked Jones in the eye, she thought of her son, who was credited with saving lives by yelling “run” when the killer paused in his rampage within Sandy Hook Elementary School.  “I hope that I did that incredible courage justice when I was able to confront Alex Jones, who is also a bully,” she said. “I hope that inspires other people to do the same.”

How much will Alex Jones end up paying? Are damages capped?

Reynal, Jones’ lead attorney, told the judge he will appeal and ask for a reduction in the damages. After the hearing, he said he thinks the punitive amount could be reduced to as little as $1.5 million, based on a Texas law capping punitive damages at $750,000 per plaintiff.

However, the plaintiffs’ attorney Mark Bankston said he believes he can challenge any attempt to reduce the damages. “We do not believe punitive damage caps are constitutional as applied to our case and will certainly litigate that issue if necessary,” Bankston told Bloomberg Law.

And despite the cap, Bankston still thinks damages will total at least $4.5 million, when you account for emotional distress and reputational damage, along with punitive damages. He plans to argue against lowering damages in bankruptcy court and notes that the other defamation trials will lead to additional damages.

“What this is heading towards is there is going to be a large set of plaintiffs who are going to be dividing up the corpse of Infowars in the bankruptcy state,” he said outside the courtroom Friday, according to a video posted on Twitter by Avery Travis, a reporter with KXAN News, an NBC station in Austin, Texas.

“Over the course of that process that can get very, very dangerous for Mr. Jones because there’s going to be a new level of financial scrutiny,” Bankston said.

What happened during the Alex Jones defamation trial?

After years of false hoax claims, Jones admitted under oath that the shooting was “100% real” and even shook hands with the parents.

However, he still had some grandstanding moments in and outside the courtroom. On the trial’s first day, he arrived at the courthouse with “Save the 1st” written on silver tape over his mouth, a sign of his declaration that the trial represented a repression of his free speech rights.

Jones, who was not present for the verdict, often missed parts of the trial to do his daily Infowars program. During one show, he said the jury was pulled from a group of people who “don’t know what planet they live on.”

When in the courtroom, Jones was prone to speak out of turn. But Judge Maya Guerra Gamble cut him off when he held forth on conspiracies, ranging from the Sept. 11 terror attacks being staged to a fake effort of the United Nations on world depopulation.