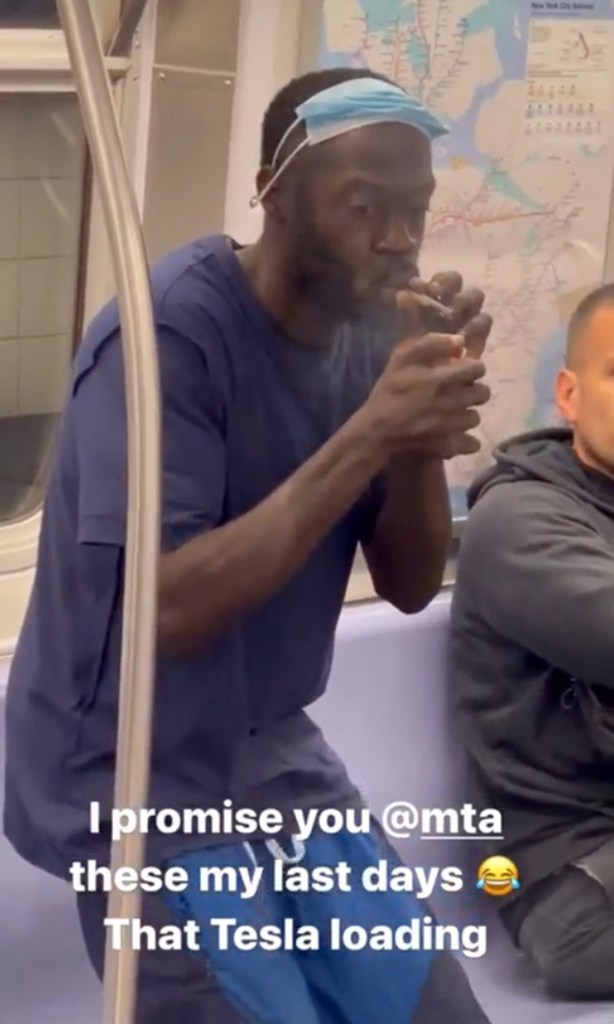 This straphanger is going off the rails.

A man caught on video smoking what appears to be crack on a city subway train has social media abuzz and New Yorkers fired up.

“Oh man!” shouts the wired, bug-eyed passenger after lighting up and sucking on a glass pipe.

“Check him out, y’all. He having the time of his life!” observes the video-taker in the 23-second clip shot aboard an uptown 4 train last month.

The pepped-up passenger — wearing a blue surgical mask around his forehead — then spins around, stands against the subway doors and shouts, “Ayo, damn man!”

A peeved passenger with a buzzcut stares straight ahead during the floor show while others put some distance between themselves and the apparent crackhead.

“That shouldn’t be happening on the train. It’s just crazy,” said Mine Bah, a 23-year-old rapper and Bronx Community College student who posted the October video to his Instagram Malcolmx_2 last month. The Brooklyn man told The Post a pal recorded the incident and he posted it from the phone. The post has over 38,000 likes.

Joked lady__d88: “My guy [buzzcut man] just sitting next to him breathing it in too trying to catch a hit 😭😭😭.”

“This was non-existent before the 2020 lockdowns. Now it happens daily,” replied Ministry of Otaku.

Activist Jason Curtis Anderson tweeted the video on Thursday, snarking, “Is smoking crack on the subway even a crime anymore?”