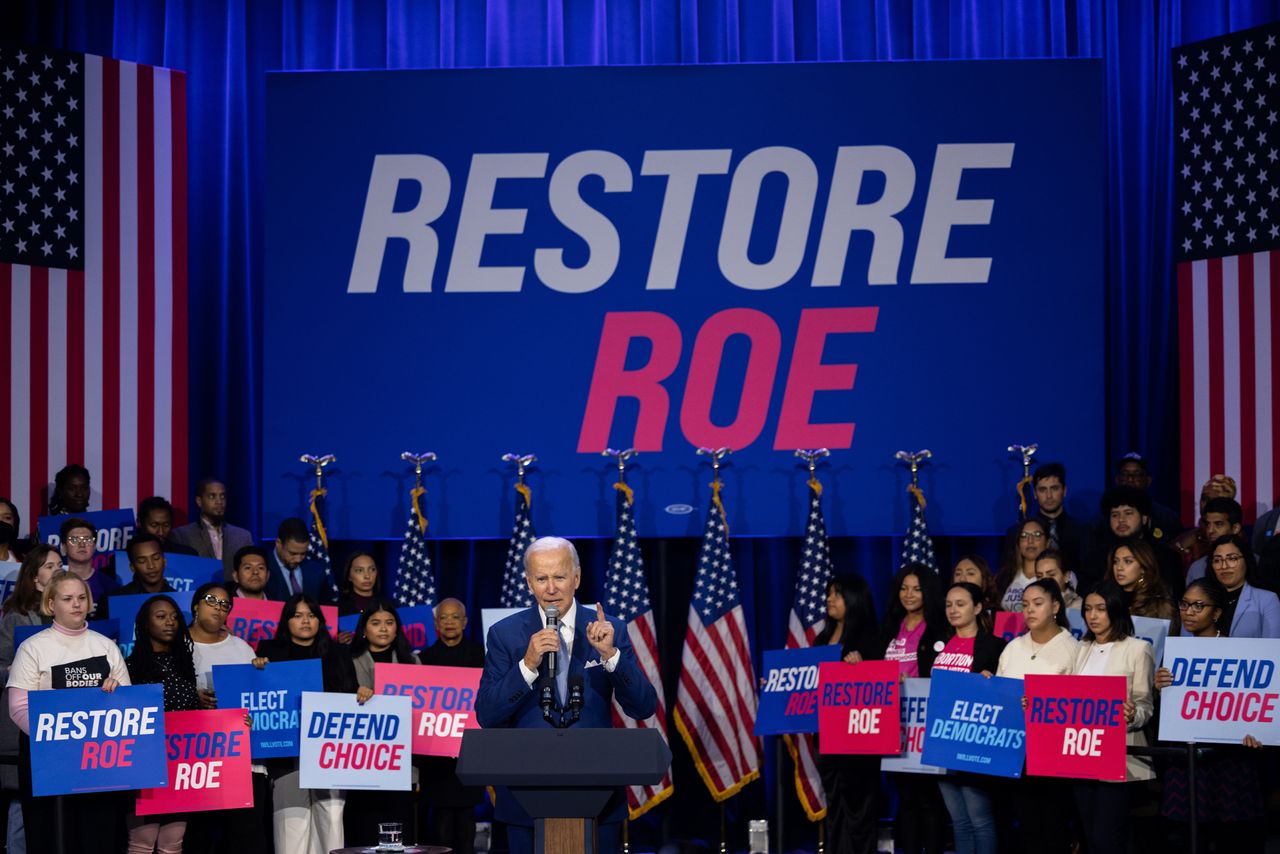 The end of national abortion rights threw a wrench in Republican plans for a “red wave” in the midterm elections by turning the advantages of running against an unpopular president’s party on their head.

The biggest policy change of President Joe Biden’s first term wasn’t passed by Congress nor signed by the president. In Dobbs v. Jackson Women’s Health Organization, which in June overturned the abortion rights precedent set in 1973 in Roe v. Wade, the U.S. Supreme Court’s Republican-appointed conservatives asserted themselves, and the party that put them on the bench as counter-incumbents to Biden. Their woefully unpopular decision — consistently opposed by at least 60% of Americans across most polls — energized Democratic Party voters when backers of the current president’s party usually are less engaged. It not only helped limit Republicans to a maximum net gain of nine seats in the U.S. House but also helped Democrats maintain Senate control and win crucial state-level races for governor and state legislature seats in more traditionally conservative states such as Arizona, Michigan, Pennsylvania and Wisconsin.

And just as the court’s Roe v. Wade ruling worked to disassemble the interests and factions that made up Democrats’ New Deal coalition, so too will Dobbs continue to tear at the seams of the GOP coalition for elections to come.

The first sign that Dobbs had changed the 2022 election dynamic came when Republican-heavy Kansas voted down an anti-abortion initiative in August. A string of Democratic overperformances in House special elections followed the Kansas vote, culminating in Democratic wins for Pat Ryan in New York and Mary Peltola in Alaska, who both ran on explicitly pro-abortion rights platforms.

Seeing how the electorate reacted to Dobbs in these races, Democrats made abortion the top attack issue in their midterm campaign with tens of millions of dollars invested in advertising. The goal all along was to energize Democratic voters over abortion rights as a way to blunt the traditional political advantage Republicans would gain as the party not in control of the White House and not presiding over the economic turmoil dragging down Biden’s approval rating.

Two post-election polls — a TV network exit poll and a Kaiser Family Foundation supplement to the Associated Press’s VoteBeat survey — back that up, with numbers showing that the Dobbs decision energized key constituencies in support of Democrats and drove crossover Republican voting in key races.

This is not to say that Dobbs was the sole reason why Democrats performed well in the midterm elections. Other factors, such as the economy’s low unemployment rate, the relative popularity of Democrats’ policy agenda and the looming presence of former President Donald Trump and his effort to halt the peaceful transfer of power on Jan. 6, 2021, also aided Democrats and hampered Republicans. Many of the candidates supported by Trump after endorsing his election fraud lies did exceptionally poorly.

But 40% of all voters and 56% of those who cast a ballot for Democrats said abortion rights had a “major impact” on their decision to vote, according to the VoteBeat survey. First-time voters (54%), young voters under 30 (52%), women under 50 (51%) and “those who said they were angry about the Supreme Court decision” (63%) were among the groups with the highest share saying the issue of abortion drove their decision to vote in 2022.

This follows the consistent findings in Gallup’s polling that around one-quarter of Republicans say they support a woman’s right to choose. This significant chunk of registered Republicans could be motivated to oppose their party over the abortion issue in upcoming elections, particularly if congressional Republicans continue to push for a national abortion ban or as red states embrace ever more draconian restrictions.

The state-level policy already appears to have driven — or depressed — voter turnout in some areas, according to The New York Times. Democrats did worse in states such as California and New York, where abortion rights were protected, and did better in Arizona, Michigan, Pennsylvania and Wisconsin, where abortion was on the ballot. There are some reasons to doubt this is a controlling explanation: Democrats may have done even worse in California and New York for various other reasons. Also, Democrats performed as poorly as the traditional political wisdom said they should in Florida, where Republicans have a free hand to restrict abortion access further.

It shouldn’t be surprising to see an uneven or slow political effect from a major Supreme Court decision like Dobbs. It took multiple election cycles for Republicans to capitalize on the court’s decision in Roe, which was unpopular when it was decided, and build a new majority coalition with crossover voting from Catholics and Southern protestant evangelicals. This culminated with Ronald Reagan’s 1980 presidential win and his dominating of the 1984 reelection campaign — the most recent blowout presidential victory — and continued with the GOP takeover of Congress in 1994.

GOP-led attacks on Roe succeeded in building a new coalition because the abortion issue “helped to redefine the scope of conflict in society,” political scientists Dave Bridge and Curt Nichols argue, by connecting the perceived attack on traditional values by a liberal court to the anti-government sentiments expressed by free market libertarians and civil rights opponents.

The same can be said of Dobbs and the other major issue that dragged on Republicans in the midterms: democracy. The predominant concern put before voters about democracy is that in embracing Trump and his anti-majoritarian political success, the Republican Party is working to secure permanent power without having to win most of the votes. In the worst-case scenario, this could involve a successful legal overthrow of an elected government, as Trump tried in 2021 and the candidates he endorsed in 2022 promised. (All of those candidates lost.)

The abortion and democracy issues overlap in three ways, political scientist Julia Azari argued in a pre-election piece for Grid. First, Azari points to an analysis of voter attitudes on abortion by Meredith Conroy and Amelia Thomson-Deveaux at FiveThirtyEight that notes that support and opposition to abortion rights are more about questions of power than fetal viability or the question of when life begins:

“If you dig into the polling and research, it becomes clear that the divide is less about people’s individual genders than the way they think about gender. People who believe in traditional gender roles — and perceive that those roles are increasingly being blurred to men’s disadvantage — are much likelier to oppose abortion than people who don’t hold those beliefs.

The dividing lines of the abortion debate aren’t just about the morality of terminating a pregnancy. They’re also about views of power. Who has it? Who doesn’t? And who should?”

As Azari notes, the exercise of power is exactly what Americans see when women and girls need to flee their home states to obtain medical care, state GOP politicians retaliate against medical providers for talking to the press about local bans on abortion and statements by Republican politicians, such as Mehmet Oz in Pennsylvania or Bo Hines in North Carolina, that abortion care should be decided, in part, by politicians.

Second, those concerns about power also apply to the Supreme Court itself. As the lone unelected branch of the federal government, the court is the least democratic of the three. And attacking the court as an unelected bench of politicians in robes is a tried-and-true attack by any who dislike its decisions. But this particular court is even less democratic than past courts.

Trump’s appointments of Justices Neil Gorsuch, Brett Kavanaugh and Amy Coney Barrett handed Republicans the supermajority they needed to overturn Roe. These three pivotal justices also happen to be the only justices in American history appointed by both a president who lost the popular vote and confirmed by the votes of senators representing a minority of the U.S. population. The only other justices in history similarly confirmed by senators representing a minority of the American electorate, Clarence Thomas and Samuel Alito, are also on the court. These are the five justices who voted to overturn Roe.

And third, there is the issue of state’s rights. In Alito’s decision in Dobbs, he declared that by overturning Roe, the court would “return the issue of abortion to the people and their elected representatives” in the states. But Republicans have so heavily gerrymandered some states – Ohio and Wisconsin, for example – that the people living there cannot achieve representative government to enact their actual preferences. Instead, they must live with abortion bans that they do not support.

The Dobbs decision itself is a product of the problem the current anti-majoritarian Republican Party presents for the American democratic tradition. And none of these concerns are going to leave the political stage any time soon.

Every week brings a new fresh horror of a woman or girl denied medical care due to the abortion bans enacted in the wake of Dobbs. The most recent story is about a Washington, D.C., woman who nearly died after a hospital in Ohio, which bans abortions at around six weeks of pregnancy, refused to treat her miscarriage and sent her home, where she almost bled out in a bathtub. These stories will not stop.

Nor will efforts to impose more stringent and punitive abortion bans. From its founding, the anti-abortion movement has had one goal: banning abortion nationwide. Anti-abortion groups like Right to Life and Susan B. Anthony Pro-Life America are promoting Tennessee’s extremely punitive abortion ban as a model for other states and the nation, according to ProPublica.

The 2024 GOP presidential primary will also put the issue front and center as anti-abortion groups have already made support for a nationwide abortion ban a litmus test for their support.

“In this new Dobbs era, some in the GOP have suggested this is an issue solely for the states to decide and that Congress and the president have no role,” Susan B. Anthony Pro-Life America said in a press release following Trump’s announcement of his third bid for the White House on Tuesday. “This amounts to a death sentence to unborn babies in blue states that allow abortion on demand until birth, such as California, Illinois and New York. It is an unacceptable position for any 2024 GOP presidential contender to hold.”

Even if Republicans wanted to sweep their support for an unpopular abortion ban under the rug, Democrats would not let them. Calling Trump a “failure as a president,” Democratic National Committee Chair Jamie Harrison said in a statement after Trump’s announcement that “Democrats stand ready to remind Americans what Trump brought America,” including “the right-wing Supreme Court that overturned Roe and paved the way for extreme Republicans across the country to criminalize abortion.”

Abortion rights groups and Democratic politicians are also likely to look at their success in ballot measure campaigns in California, Kansas, Kentucky, Michigan, Montana and Vermont in 2022 as a way to spur turnout in 2024 and beyond. States that allow ballot measures include those where Democrats will be defending their Senate majority in 2024, including Arizona, Montana, Nevada and Ohio.

The political fallout from Dobbs is just getting started. Just as the anti-abortion forces that came together following Roe did not solely affect the elections immediately following the decision, the forces fighting back against Dobbs will continue to alter the political landscape as they seek to reclaim the right that the court’s conservatives stripped from them.