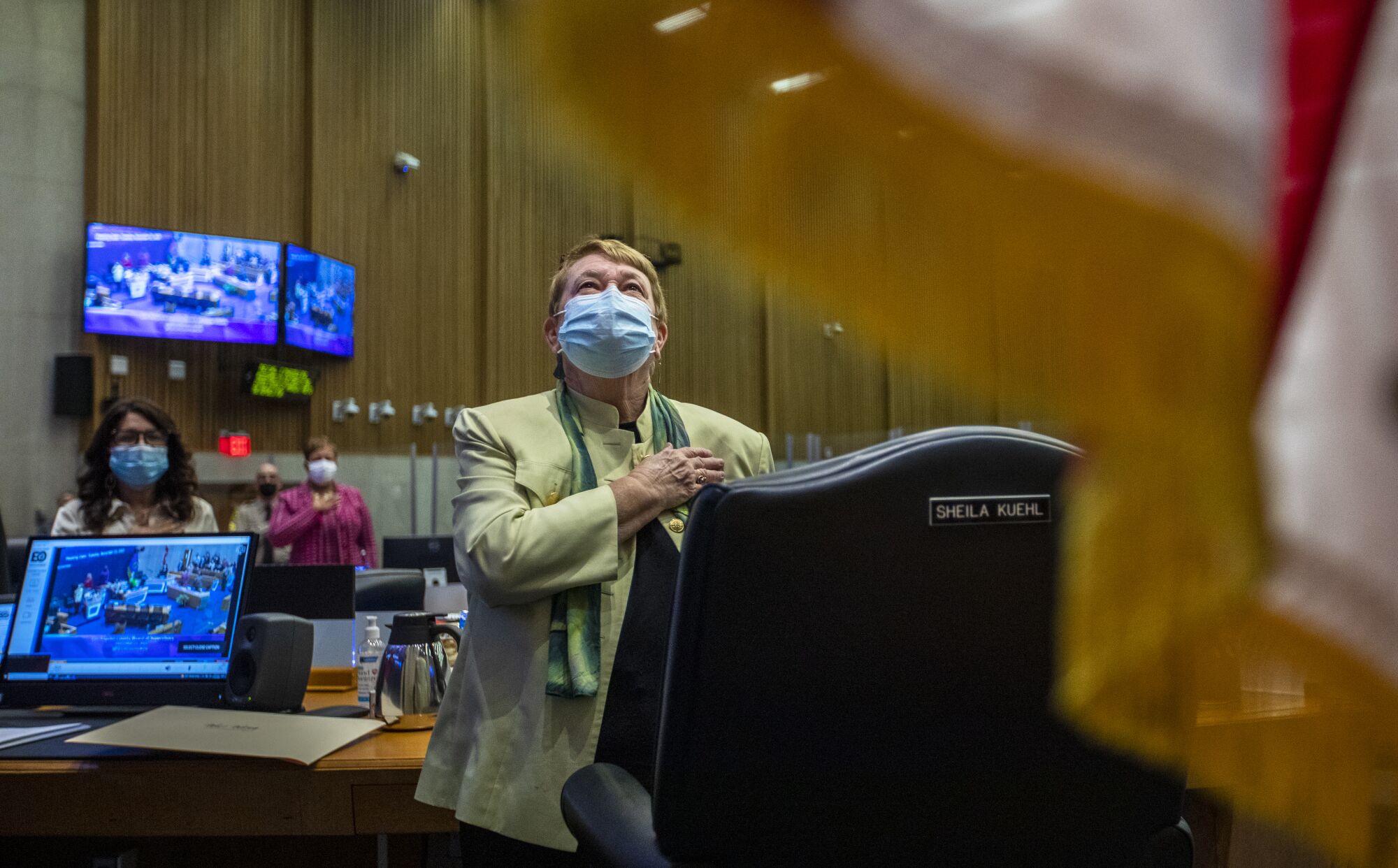 Kuehl said she needed all the protection she could find in 1994 as she campaigned for a state Assembly seat that would make her California’s first openly gay state legislator. After the death threats continued through her primary, then-Assembly Speaker Willie Brown assigned someone to guard her at public events.

This year, as Kuehl prepared to leave elected office after two terms on the Los Angeles County Board of Supervisors, she would once again find herself escorted by men and women in bulletproof vests.

Only this time, they were not there to assist. They were there to search her Santa Monica home, part of a long-simmering criminal investigation spearheaded by outgoing Sheriff Alex Villanueva. The deputies took her phones, computer and some old “The Many Loves of Dobie Gillis” tapes, a vestige of Kuehl’s days as a teenage actress.

Like many of Villanueva’s critics, Kuehl has condemned the search as an unabashed attempt by the sheriff to silence his opposition. But the longtime politician said she also saw it as an oddly fitting bookend to her 28 years in public office.

The 81-year-old supervisor’s time in the arena is now coming to a close. Tuesday’s board meeting was her final as county supervisor for District 3, a sprawling, 431-square-mile swath of Los Angeles County that spans the San Fernando Valley and much of the coast.

“I feel like I have been so fortunate for these last almost 30 years in public office because I am paid to try to achieve justice. Paid!” said Kuehl at a morning board session held in her honor. “I can’t imagine a more wonderful way to spend a work life than to be told, ‘Here’s a check — and kind of a blank check — go and do good.’ ”

Behind a small pile of bouquets, Kuehl addressed an intimate audience Tuesday, composed mostly of county employees and department heads. Each had been handed posters of Kuehl’s face to wave. Near the end of the meeting, they gave Kuehl, a science fiction buff, an $810 gift card to Barnes & Noble.

Kuehl’s colleagues all used Tuesday’s meeting as a chance to commend her on her record championing the county’s most marginalized residents.

Board Chair Holly J. Mitchell promised to continue making headway on the progressive path that Kuehl started the county down eight years ago. Supervisor Kathryn Barger called Kuehl a straight shooter, laser-focused on lifting up foster youth, women, and LGBTQ constituents. Supervisor Janice Hahn, who videoconferenced into the meeting, said Kuehl was tireless, routinely calling her on Sunday nights so the two could spend the dwindling hours of their weekend scouring the motions the board would discuss in the week ahead.

All remembered Kuehl as a fighter.

“The legacy that you have left for future generations — for LGBTQ, for transgender, for all of those entities that we’ve already discussed — they’re going to know that a champion was here,” said an emotional Supervisor Hilda Solis, who teared up as she outlined her decades long history with Kuehl dating back to their time as like-minded legislators in Sacramento.

Over her eight years in office, Kuehl earned a reputation as a fierce advocate for criminal justice reform and environmental protections. She helped earmark hundreds of millions of dollars to transition the county away from jails. She championed Measure W, which created a tax to help pay for projects that conserve stormwater. Earlier this year, she helped push through an ordinance to curb the use of single-use plastics over fierce pushback from plastic and restaurant industry groups.

Kuehl said she’s confident some of these progressive policy priorities will live on in Supervisor-elect Lindsey Horvath, who will replace her as the county supervisor for the third district. Horvath, who watched Tuesday’s meetings from the board room’s side benches, will be sworn in Dec. 5.