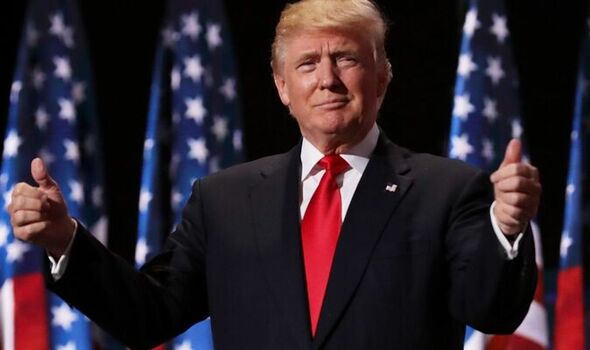 Donald Trump is the only Republican candidate, so far, to announce a 2024 bid. (Image: GETTY)

Donald Trump’s announcement for his third presidential bid poses a dilemma for the GOP. Following a lacklustre midterm cycle for the Republicans – particularly those backed by Trump – many senior GOP members have turned on the former president and one-time vote winner.

His candidates proved unable to effectively win over independent voters who likely shy away from the more extreme tenants of the MAGA movement, including election denial.

However, Trump is incredibly popular with the GOP’s base, a fact which is likely to determine the outcome of the Republican primary.

But, given the disastrous midterm results – where Republicans failed to take the Senate and barely hold a majority in the House of Representatives, despite Joe Biden’s abysmal approval ratings – who are the Republican primary challengers?

Here we take a closer look at seven GOP politicians who may (or may not) be bold enough to take on Donald Trump in the contest for a shot at the nation’s top job.

Emboldened by his stunning Florida victory, Ron DeSantis has the momentum to launch a 2024 campaign (Image: GETTY)

The Florida Governor has become a media favourite to take on Trump in a 2024 primary. The two have already had a few heated exchanges leading up to and following the midterms.

DeSantis, 44, was endorsed by Trump in his 2018 gubernatorial bid, however his 2022 re-election is what really dazzled voters and GOP donors.

He won re-election by nearly a 20-point margin and flipped traditionally Democratic districts during an election cycle in which Republicans struggled to gain ground.

Campaigning on so-called “culture war” issues he has cultivated Florida into a bastion of freedom in a country he sees increasingly influenced by the “woke mob”.

DeSantis is the only Republican who is remotely close to Trump in polls among likely GOP voters and even leads him in some polls following the midterms.

Previously, Ron DeSantis had ruled out taking on Trump head to head, likely knowing he would lose while incurring the wrath of the former president.
Now, however, things don’t seem so sure. He has the momentum, but will he use it to launch a 2024 campaign?

Even if the Florida Governor bides his time, he would only be 50 years-old in 2028, when Trump would be barred from running again if he won a second term in ’24.

The Governor of Virginia has impressed GOP bigwigs by winning in a state which traditionally leans towards the Democrats.

Youngkin, 55, also waded into the “culture wars” particularly around the issues of gender identity and the claims that critical race theory is being taught in public schools. He even signed an executive order banning the latter.

However, he has avoided close political contact with Donald Trump and has openly rejected his claims of 2020 election fraud, leading some pundits to see him as more of a moderate Republican choice.

Although there has been less chatter around Youngkin than DeSantis, he has attracted the attention of Republican megadonors and has begun putting the fundraising machinery in place for a 2024 run.

Donald Trump’s former vice president has hinted in the past that he would be willing to consider a 2024 run. On top of that he has released a memoir slamming the former president and consistently visits key primary states.

When asked during an appearance at Georgetown University if he would back Donald Trump in 2024, he dodged the question saying: “Well, there might be someone I like more.”

However, the former VP may find it difficult to mount a primary challenge against his former boss.

Trump’s supporters, during the January 6 Capitol riot, chanted “hang Mike Pence” after he refused to block the certification of election results for Joe Biden’s victory.

Pence, 63, may be able to pull in independent and centre right voters, however he would likely struggle to pull support from the MAGA Republicans which he would need to beat Donald Trump.

Nikki Haley could be a VP pick or could make a run of her own. (Image: GETTY)

Nikki Haley, 50, hasn’t been in the news much of late. The former South Carolina Governor served under Trump as the US Ambassador to the United Nations.

During her time in that position, she was a fierce advocate for Trump’s policies and largely favoured within the party.

She resigned after just after two years on the job but her exit was dignified and didn’t draw the ire of the former president who she praised on her way out.

Haley is of Indian descent and would add diversity to a primary competition. However, many observers see her as a potential pick for VP by Trump or even Ron DeSantis should he decide to run.

Greg Abbott has been quiet on running, but previously there had been talk of a campaign. (Image: GETTY)

Texas Governor Greg Abbott, 64, was endorsed by Trump in his third run for Governor, which he won against high-profile Democrat Beto O’Rourke.

Abbott’s policies have become increasingly conservative – he opposed Covid lockdowns and vaccine mandates and more recently signed the most restrictive abortion ban of any US state.

He is also in the process of constructing a new border barrier between his state and Mexico. These policies will likely play well with the conservative Republican base.

However, it is yet to be seen if he would turn against his ally, Donald Trump. There have been whispers of a potential 2024 run, but Abbott has been quiet on the issue for some time.

READ MORE: Pelosi announces that she is stepping down as Democratic House leader

Liz Cheney is unlikely to clinch the nomination but has vowed to keep Trump out of the White house. (Image: GETTY)

Outgoing Representative Liz Cheney, 56, would make for a controversial run against the former president.

She famously is vice-chair on the January 6 committee in the House of Representatives investigating the Capitol riot and has battled the former president over his cries of election fraud in 2020.

She even backed Democratic candidates in some House races during the midterms and trolled Trump-backed election denier Kari Lake on Twitter when Lake lost her Arizona gubernatorial race.

She has vowed to do anything she can to keep Trump out of the White House and has said she would soon make a decision about running in 2024.

Although there is little chance of Cheney clinching the nomination, her entrance into the race would certainly make for some interesting debates.

Texas Senator Ted Cruz, 51, put up a good fight against Trump in the 2016 Republican primary and refused to immediately back the former President .

Although he has since endorsed Trump, he has his maintained a distinct profile on the right of the party and he is the only potential contender who polls anywhere close to DeSantis and Trump in a 2024 match up.

However, it is still unlikely the Texas Senator would be able to match a serious challenge against the former president as the far-right base of the party would likely choose Trump over Cruz.

There are also some concerns over whether Cruz meets the constitutional requirements to serve as President of the United States. The Senator was born in Canada, something Trump hammered home during their last primary showdown.

However, the majority of constitutional scholars agree that Cruz is eligible to serve as president.