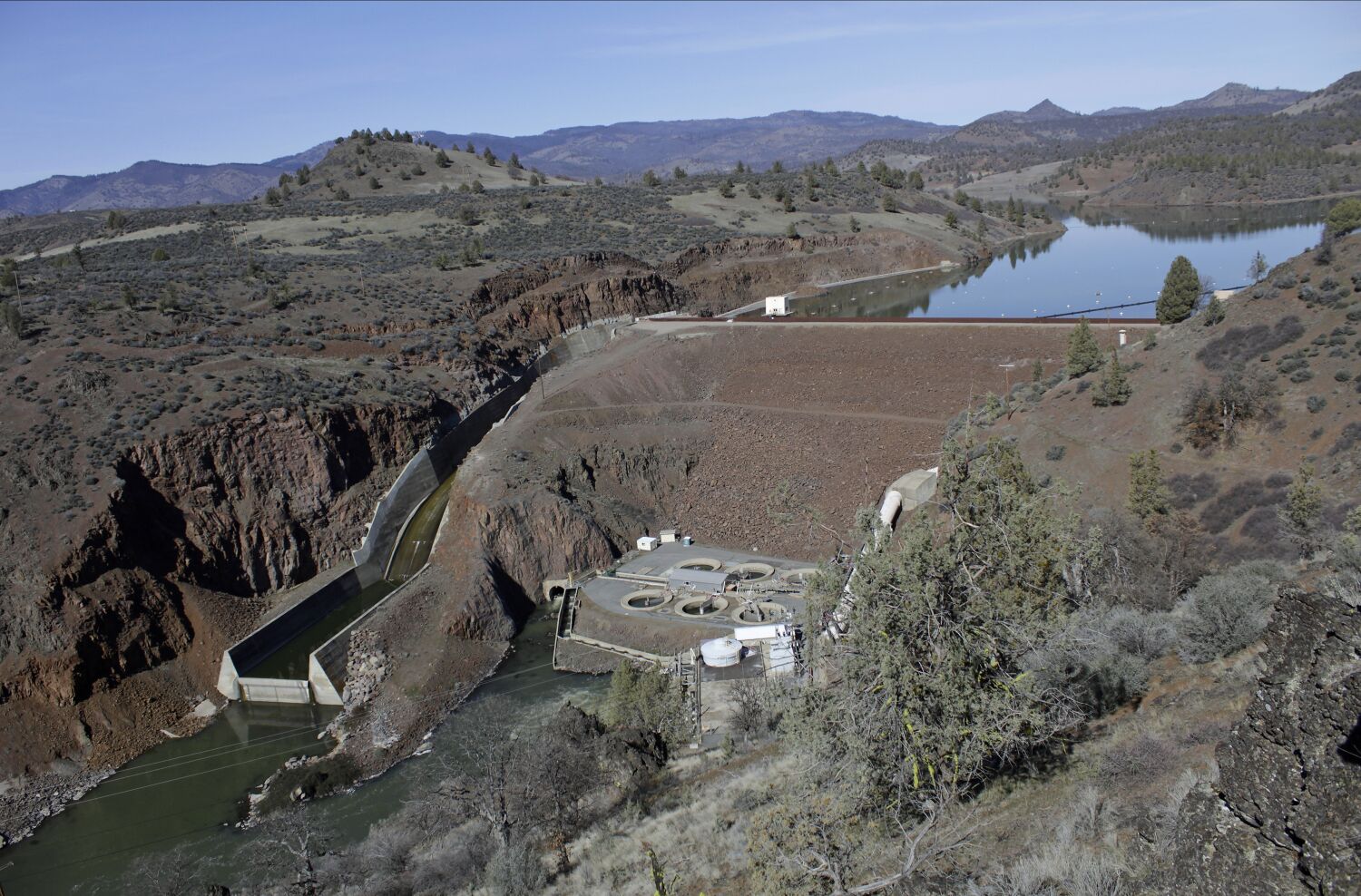 In a milestone decision, federal regulators on Thursday signed off on plans to demolish four aging dams along the Klamath River, paving the way for hundreds of miles of native fish habitat along the California-Oregon border to flow freely for the first time in more than a century.

The Federal Energy Regulatory Commission’s decision will see licenses of the four dams transferred from the PacifiCorp energy company — a subsidiary of Warren Buffet’s Berkshire Hathaway — to the Klamath River Renewal Corporation, a nonprofit entity created to oversee the dam removal, and to the states of California and Oregon.

The vote marks the final major hurdle for what will be the largest dam removal project in the nation’s history, officials said. The $500-million demolition has been championed by environmental organizations, commercial fishing groups and tribes who spent 20 years fighting for the river’s restoration.

“The Klamath salmon are coming home,” Yurok Chairman Joseph James said in a statement. “The people have earned this victory and with it, we carry on our sacred duty to the fish that have sustained our people since the beginning of time.”

Officials said the dam removal process could begin as soon as next year, with the smallest dam, Copco 2, slated to be removed first. Deconstruction of the remaining three dams will occur in early 2024, with all four dams removed by the end of that year.

FERC commissioners on Thursday described the decision as “momentous,” “historic,” and “the culmination of years of work.”

“Some people might ask why, in this time of great need for zero-emissions energy, why are we, why is the licensee, agreeing to remove the dams?” Chairman Richard Glick said during the meeting. “First, we have to understand this doesn’t happen every day … A lot of these projects were licensed a number of years back when there wasn’t as much focus on environmental issues, and some of these projects have a significant impact on the environment and a significant impact on fish and other wildlife.”

Indeed, salmon populations in the once-teeming Klamath Basin have dwindled to almost nothing in large part because of the dam-blocked habitat. In an April letter to FERC, the Pacific Fishery Management Council noted that the Klamath River once produced the “third-most prolific salmon runs of all river systems in the lower 48 states.”

Today, those runs are at only a “small fraction of their historical average,” the council said, with two of the runs listed under the Federal or California Endangered Species Acts, or both.

Mark Bransom, chief executive of the Klamath River Renewal Corporation, said the dam removal will not only create conditions that will allow fish to move up and down the river freely, but will also help improve water-quality conditions on the river, including toxic algal blooms in stagnant reservoirs.

“People consider this to be a salmon recovery project — I like to characterize it as a resiliency project,” he said on the phone. “It is not only a project to restore conditions for salmon and other species to regain a toehold in their historic range, but it is also being done to enhance the resiliency of the many communities that are reliant on the river, including the tribes. … We really are standing on the shoulders of the tribes who have been working so hard for this day and ultimately for dam removal for decades.”

Bransom said funding for the half-a-billion-dollar project will come primarily from California’s Prop. 1 water bond and from PacifiCorp, noting that it would cost more for the company to upgrade the facilities to today’s standards than to enter into the agreement. He said the dams currently generate a “trivial amount of electricity” that has already been replaced many times over, including through renewables from PacifiCorp.

FERC’s decision kicks off a 30-day timeline for the states and the Renewal Corporation to approve the transfer, though he anticipated it would take less than a couple of weeks to do so.

The plan has seen some opposition, however, including from some local residents who have been skeptical of the project’s scope and costs. One 13-page opposition letter submitted to the commission this week expressed concerns about property values and flooding, among other issues.

But the decision was largely considered a victory, with FERC Commissioner Allison Clements saying it is “perhaps fitting” that the vote arrived during National Native American Heritage Month.

Craig Tucker, Natural Resources Policy Advocate for the Karuk Tribe, said he spent “half my life trying to get to today.”

“The tribes here — this includes the Yurok, the Karuk, the Hoopa, the Shasta, the Klamath Tribes — they were salmon people,” Tucker said on the phone. “Salmon were part of their subsistence, part of their culture, part of their spiritual life, and so losing those fish has a lot of consequences. Some of it is just nutrition and health, but some of it is really a loss of cultural identity. Removing these dams will reverse those trends and make sure that salmon survive into the future, and that these tribal cultures continue to survive into the future.”

Tucker noted that when the tribes first launched the effort 20 years ago, it seemed like a pipe dream.

“Everybody thought it was a ridiculous demand — there’s no way you’re going to remove four big dams, no one does that,” he said. “It’s been a pretty epic social justice campaign for a lot of years, so we’re going to put a marker down and declare victory today.”