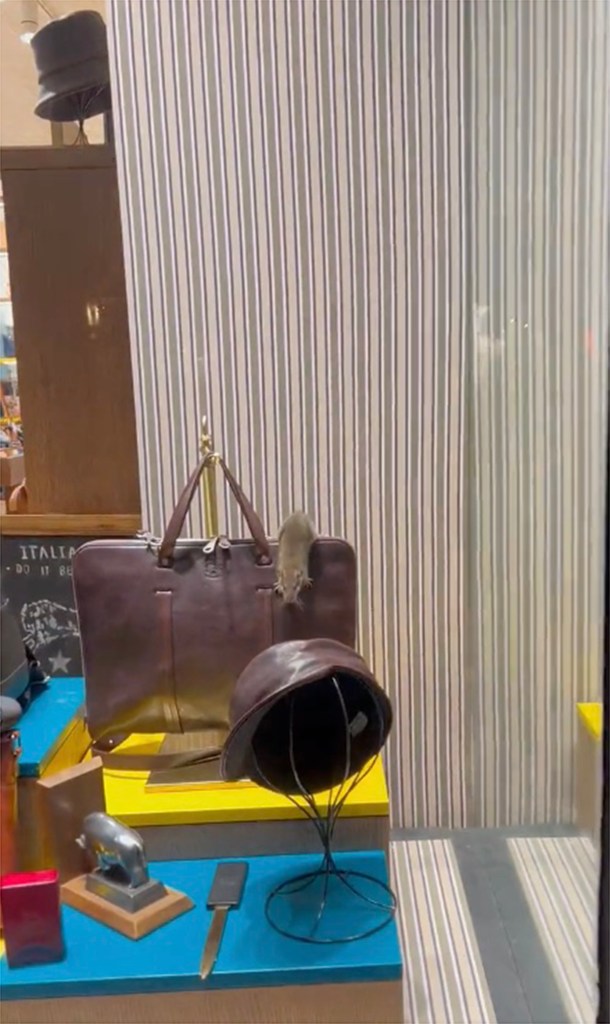 This Big Apple rat’s fashion sense is definitely not cheesy.

Shoppers in Manhattan’s trendy West Village got more than they bargained for Wednesday night when a large rat was spotted in the shop window of a luxury boutique store.

New York City-based photographer Max Guliani was browsing on Bleeker Street just before 7p.m. when he saw the fashionable fur ball hopping around on a leather briefcase and cap displayed in the window of Il Bisonte.

Guliani took a video of the skin-crawling sight, which he shared on Twitter.

“Window shopping in New York City,” he captioned the post.

Speaking to The Post Thursday, Guliani said he was “shocked” to see the rat in the window.

“It made me think of the TikTok viral sound— ‘But the rats don’t run this city. We do,’” he said.

Lisa Stefani, the boutique’s manager, told The Post that she was alerted to the unwanted customer around 8:45 p.m. Wednesday — and promptly closed the store and called an exterminator.

“There was a group of young boys, like three or four of them standing out here, and then they start knocking on the window and they showed me, and I closed the store, turned out the lights, ran out of here, and called the exterminator,” Stefani said.

Stefani said that most of the products in the Bleeker Street boutique are priced between $200-$300. The cap the rat jumped on costs a cool $255.

The retail manager, who said she had never seen a rodent in the store before, said she had noticed the garbage issue in the city getting worse.

“Yes, of course, it’s crazy on the streets…I but have never seen [a rat] inside the store,” she told The Post.

“Also, this little neighborhood on the weekends, has gotten more and more traffic, and the garbage is getting crazier and crazier out here.”

“At night there are rats on most corners!” he said. “The trash bags move when I walk past them.”

But while rats might seem to run the streets and the stores in the Big Apple, New Yorkers can find some solace knowing that New York City actually is not the rattiest place in America.

Last month, The Post reported that the ratropolis honor belongs to Chicago. New York — home of Pizza Rat and other rodent celebs — comes in a close second.

“These deserted dining sheds have become eyesores for neighbors and havens for rats, and we are going to tear them down,” he said at the time.