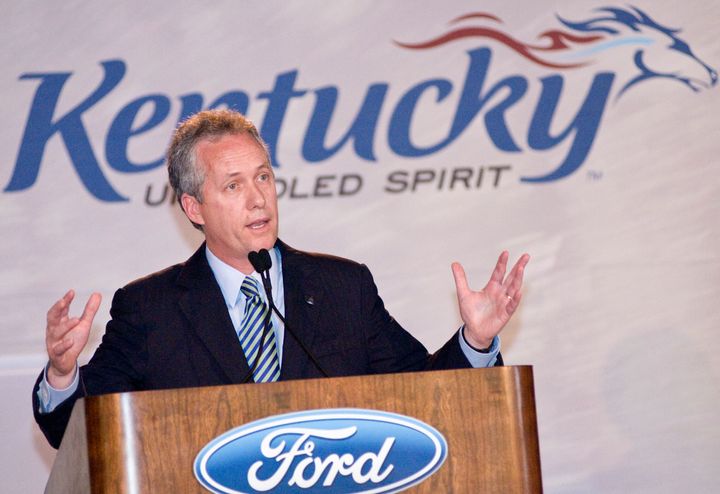 Authorities are searching for a man caught on video punching the mayor of Louisville, Kentucky, knocking him to the pavement, and then walking away.

Greg Fischer, a Democrat who has been mayor of Kentucky’s largest city since 2011, wasn’t seriously hurt in the attack at a downtown entertainment complex Saturday evening.

Video shows Fischer interacting with people on the street when a man walks up and punches him hard in the upper chest, knocking him down. The assailant then turns and walks away.

The suspect remained at large on Tuesday and the search was “active and ongoing,” a police spokesperson told HuffPost. Photos of the suspect, who has not been identified, were shared by police on social media.

Police in Louisville, Kentucky, are searching for a suspect they believe punched the city’s mayor at a popular downtown event complex

“Earlier this evening, while at Fourth Street Live, Mayor (Greg) Fischer was punched by an individual,” the Louisville (1/2)#GregFischer pic.twitter.com/mFnFf2V7NL

Fischer, speaking to local station WLKY a day after the attack, said he is doing well and focused on “moving forward.”

“You know, we are living in strange times all across America right now, I think,” Fischer said. “And I have the honor of being right in the middle of all of it.”

The violence follows a gunman opening fire in February at the campaign office of Democratic mayoral candidate Craig Greenberg, who is running to replace the term-limited Fischer. Greenberg said a bullet tore a hole in his sweater, but he wasn’t hit. A local activist is awaiting trial on charges related to the shooting, according to the Louisville Courier Journal.

Greenberg urged the person who assaulted Fischer to surrender. “We cannot solve our disagreements with violence,” he tweeted.

The apparent ease with which the suspect approached Fischer and escaped capture raised questions about his security detail, which the mayor’s office said was present at the time of the incident.

“While it’s not appropriate to comment on specifics of that detail, it is always being evaluated and adjusted as needed,” Jessica Wethington, a spokesperson for the mayor’s office, told local station WDRB. Wethington did not immediately respond to HuffPost’s request for comment.

A security consultant who reviewed the surveillance footage told WDRB that Fischer’s security team members initially appeared to go after the assailant, but quickly returned to the mayor. The consultant, Charles Nance, said he agreed with that decision.

“That could have been a ploy to get me away from my target, who I’m protecting,” Nance said. “So once you give me away, then you can do whatever you gotta do or wanted to do. You could have shot him or stabbed him or whatever the case may be.”