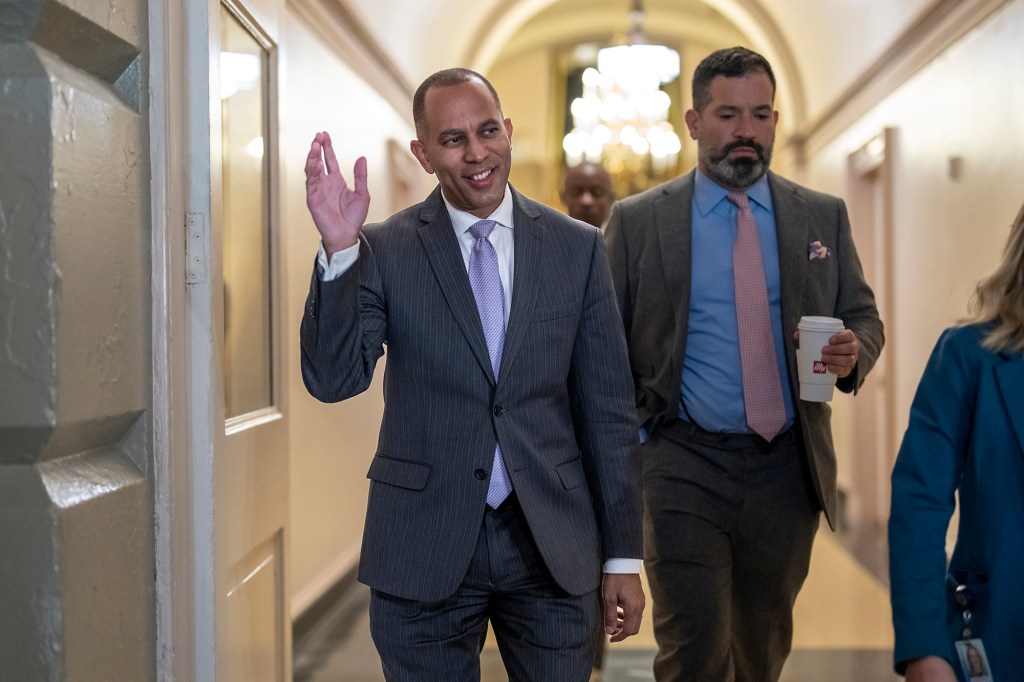 WASHINGTON – It’s the worst-kept secret in the nation’s capital: Brooklyn and Queens Rep. Hakeem Jeffries is the odds-on favorite to succeed Nancy Pelosi as Democratic leader in the House of Representatives.

On Thursday, minutes after the 82-year-old Pelosi announced she would not stand for a leadership role in the next Congress, her allies made moves to clear the field for Jeffries, 52, and two other members of the new generation of party leaders to take the top three Democratic slots.

House Majority Leader Steny Hoyer (D-Md.), 83, announced shortly after Pelosi laid out her future plans on the chamber floor that he, too, would not seek a leadership role when the 118th Congress convenes Jan. 3.

Majority Whip James Clyburn (D-SC), 82, told The Post that he would back Jeffries for leader, and the Congressional Black Caucus — which includes about a quarter of House Democrats — was likely to follow his lead.

Meanwhile, a source in New York’s House delegation added that Pelosi was expected to line up her fellow Californians behind Jeffries, all but ensuring he will become Minority Leader in the new Congress — and in line to be the first black Speaker of the House should Democrats regain the chamber after the 2024 elections.

Current Assistant Speaker Katherine Clark (D-Mass.), 59, is likely to be elected Minority Whip with Rep. Pete Aguilar (D-Calif.), 43, sliding into the No. 3 position, while Clyburn will become assistant party leader.

Jeffries had been mulling over running for Democratic leader before Pelosi’s Thursday announcement, a Capitol Hill insider told the Post on Saturday. A devotee to the outgoing Speaker, Hakeem was expected to “profess his close association with Nancy” in his run.

“She has put him in leadership, so there’s a relationship there,” the source said.

Jeffries, Clark, and Aguilar sat with Clyburn to watch Pelosi’s speech announcing her departure from leadership and all three thanked her on social media Thursday, with Jeffries calling her the “G.O.A.T.” — short for “greatest of all time.”

“Thank you, Madam Speaker, for your leadership and your tireless advocacy for our state,” wrote Aguilar, Pelosi’s fellow Californian.

Clark posted a photo of her hugging Pelosi – who made history in 2007 as the first female Speaker of the House.

“As the first woman Speaker of the US House of Representatives, [Pelosi] demonstrated to the world that women could be leaders at the highest levels,” Clark wrote. “Speaker Pelosi has proven that when women are at the table, the work of Congress is more effective and responsive to the American people.

Jeffries has long been viewed as a contender for House Democratic leadership, with allies suggesting he could bridge the party’s traditional liberal and progressive factions.

“I think Hakeem has the temperament, he has the intelligence, I think he has the vision and is the perfect bridge between the older and younger generations,” one member of the Congressional Black Caucus told The Post in January. “He is a product of not only Brooklyn but he — like many, many younger members of Congress — is connected to hip-hop. And I think that he understands what it means to be a coalition builder.”