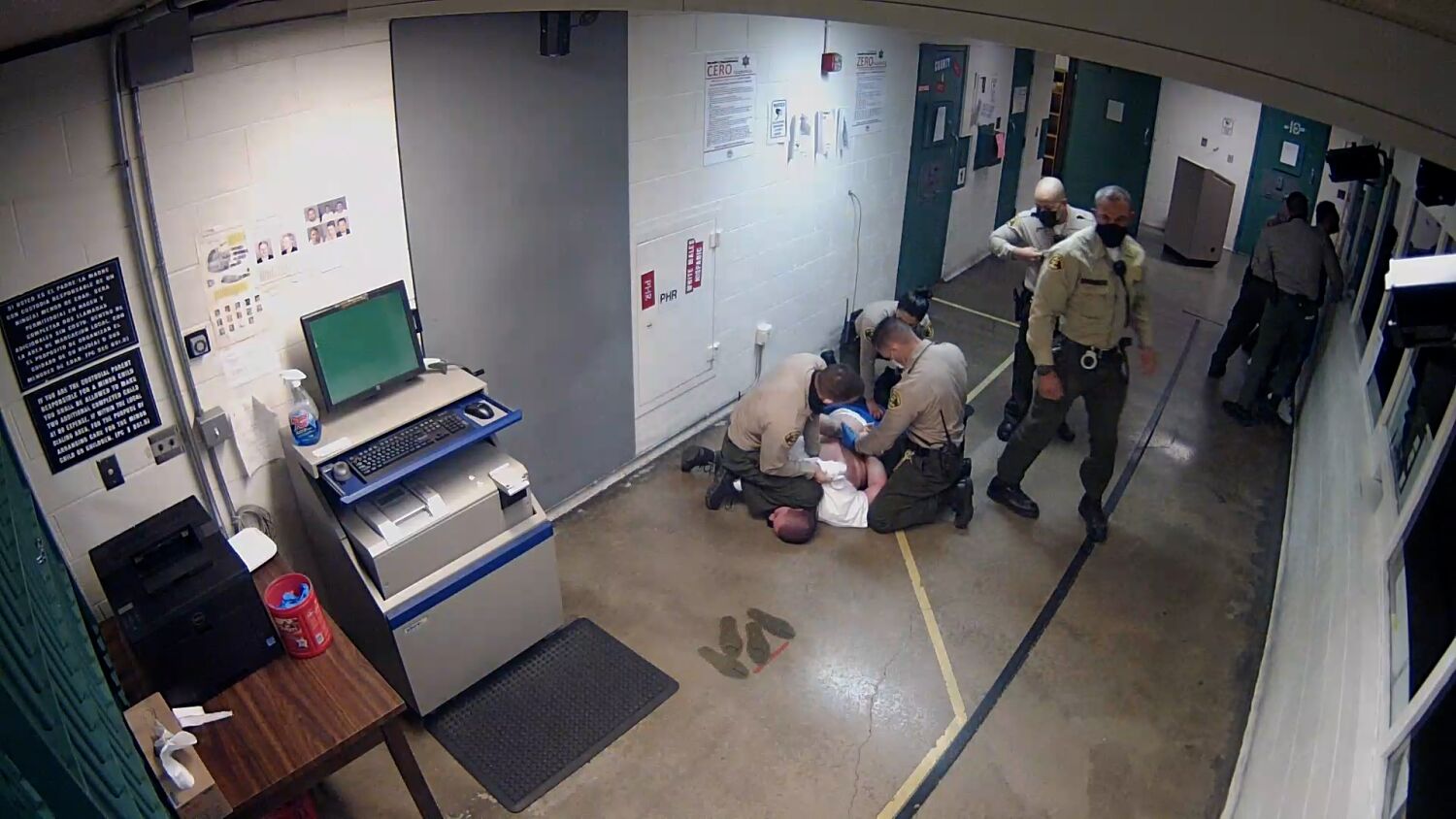 A Los Angeles County sheriff’s deputy who kneeled on the head of a handcuffed inmate last year will not face criminal charges, records show.

L.A. County prosecutors laid out their decision in a 16-page memo, which The Times reviewed. In it, they concluded there was insufficient evidence to prove Deputy Doug Johnson committed the crime of assault under color of authority.

“While the method employed by Johnson may appear concerning, the available evidence is inconclusive and suggests the amount of force used was not excessive,” the memo says.

Prosecutors said they could not determine from the video how much weight Johnson put on the inmate, Enzo Escalante, but that his injuries appeared minor. The memo says Escalante’s statements to authorities afterward suggest he didn’t think the force used against him was unreasonable.

“Shortly after the incident, Escalante described Johnson as ‘just doing his job’ and said when he informed Johnson that he was having trouble breathing after being taken to the ground, Johnson adjusted his weight so he could breathe normally,” the memo said.

Those officials decided not to pursue criminal charges against Escalante, who had punched the deputy in the face, to avoid drawing attention to the incident, the commander wrote. Charges eventually were filed against him, but they were dropped this week. The district attorney’s office said it was “unable to proceed because a material witness was unavailable.” They did not identify the witness.

The case garnered national attention when Sheriff Alex Villanueva announced that a Times reporter was a subject of a criminal investigation into the video leak. The commander and two other former high-ranking officials have filed lawsuits accusing Villanueva of orchestrating the cover-up.

The incident happened on the morning of March 10, 2021, two days after jury selection had begun in the trial of Derek Chauvin, the former Minneapolis police officer who would be convicted of murdering Floyd by kneeling on his neck.

Deputies were doing routine searches of inmates before their appearances at the San Fernando courthouse. Escalante was awaiting trial on multiple charges, including murder.

Escalante and another inmate were talking, and deputies told them to be quiet. When they didn’t comply, Johnson ordered Escalante to stop and face the wall, according to Johnson’s report on the incident.

Security video obtained by The Times showed Johnson walking closely behind Escalante through a hallway before ushering him toward a wall. Escalante then turned around and punched Johnson in the face multiple times.

Johnson and other deputies took Escalante to the ground, positioning him face-down.

Johnson kept his knee on Escalante’s head for three minutes, even though deputies had handcuffed him. Deputies eventually tied Escalante’s legs together before lifting him onto a wheelchair and strapping him into it, the video shows.

In the memo, prosecutors also wrote that Escalante’s criminal history makes him a “particularly unsympathetic victim.” Earlier this year, the memo says, Escalante was convicted of murdering two people.

The district attorney’s office said Thursday he was sentenced to life in prison without the possibility of parole.