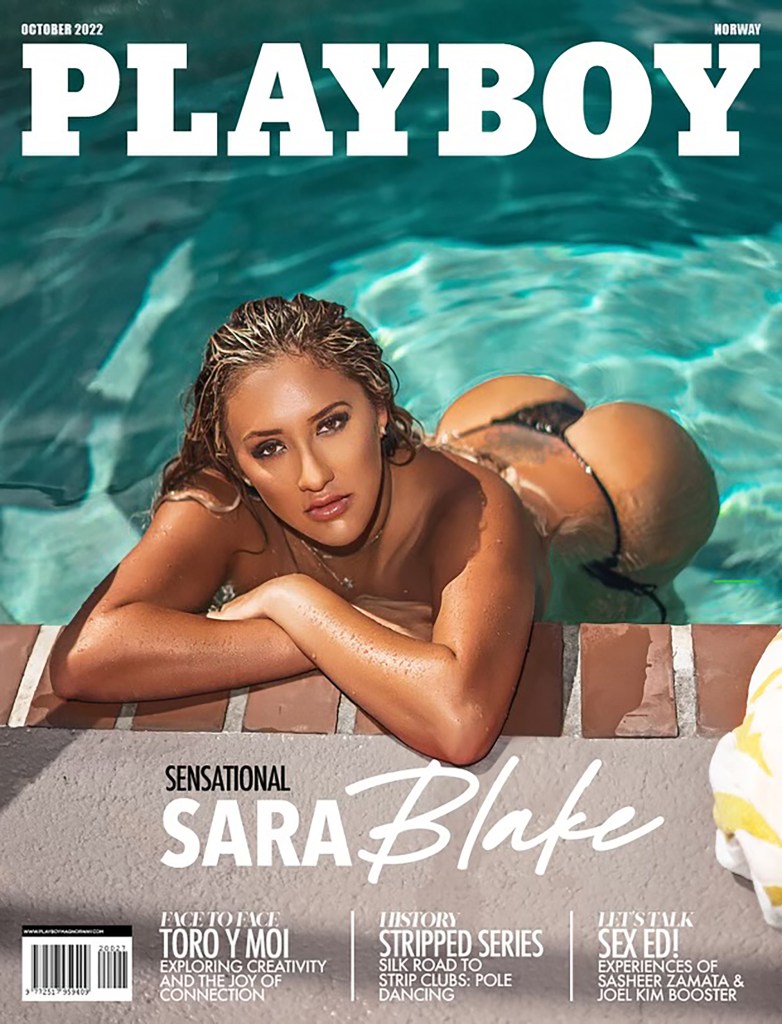 This team of tight-ended temptresses wants to score with Tom Brady.

A Playboy playmate, a Brazilian bombshell and a foxy football aficionado all say they dream of going long with the NFL’s newly single megastar after Brady and his supermodel wife Gisele Bündchen called it quits.

And they’re ready to blitz the 45-year-old father, suddenly one of the world’s most desirable bachelors after 13 years of marriage.

“I would have to essentially ask my husband for a hall pass,” Playboy model Sara Blake told The Post, meaning she’d need his OK to make a move on the gridiron great.

Despite being happily married, Blake, of Tampa, fantasized about a private huddle with Brady as he moves on from Bündchen, who has been spotted in Costa Rica with jiu-jitsu instructor Joaquim Valente.

“I’d be like, ‘Hey, what’s up, good looking? I love your chiseled jawline and you have such a cannon,’” Blake chuckled. “You know, ‘You’re the greatest quarterback of all-time … and screw Gisele.’ That’s what I would probably say.”

The 31-year-old stunner, who graced October’s cover of Playboy Norway and hosts a sports podcast, “Tip Drill with Sara Blake,” said she loves Brady’s commitment to fitness, which includes relentless workouts and a plant-based diet.

“Somebody that dedicated to their craft and their profession who wants to be the best and has that drive, that’s extremely attractive,” Blake said of the seven-time Super Bowl winner. “Those are things that women look at.”

Brazilian model Mayara Lopes said she’d also make a play for the “very handsome and mysterious” Brady, despite not being much of a football fan.

“I wouldn’t necessarily approach him directly, but I would make eye contact and try to get his attention,” Lopes, 35, told The Post. “And you know, if I think he gave me attention, then maybe I’d make a move.”

Lopes, a São Paulo native now living in Orlando, said she didn’t have a Brady-specific game plan in advance of any chance meeting. The petite, tattooed knockout recalled watching Brady and the New England Patriots with her husband — whom she’s since divorced — and would be game for getting to know him.

“If I had the opportunity, absolutely,” Lopes said with a laugh.

Some of Brady’s potential pursuers have long admired his accomplishments as an athlete.

Kendra Middleton, a 26-year-old college sports reporter for New England Sports Network and podcast host, grew up in Florida as a Jacksonville Jaguars fan but considers Brady her first football-related “crush,” she said.

“Obviously, he’s very physically attractive, but his work ethic is awesome — I love it,” said Middleton, who now lives in Boston. “Like, he’s so dedicated to his craft that he doesn’t even eat tomatoes, you know what I mean?”

“Tom’s entire identity for a couple of decades now has been football,” Middleton said. “And I’m sure [divorce] is scary for someone who doesn’t have experience being around their kids all the time. Maybe this is what Tom needs to build those relationships. His future is family.”

“His love for football and his will to never give up,” Stark said of Brady’s qualities she admires. “And he’s a little different from other QBs, in the way he’s kind of holistic. It’s just fascinating.”

Those traits combined with Brady’s undeniable sex appeal make him a “whole package deal,” said Stark, who is single.

“Not that I have a shot or anything, but I think any single girl is like, ‘Oh yeah, Tom Brady is single and back on the market,’” Stark said, adding that she’d do her best to win him over if their paths crossed.

“Oh, one million percent, I would regret it if I didn’t.”

But some ladies were turned off by Brady’s decisions, which include having backed the scandal-scarred FTX crypto company and returning to the NFL for his 23rd season in March after calling it quits for just 40 days.

“Tom became less attractive to me when he came out of retirement so quickly,” a married California mother of two told The Post.

The vibrant and attractive blonde — who requested anonymity since she’s not single — said Brady should have put his family first and focused on his three children: Jack, 15, Benjamin, 12, and 9-year-old Vivian.

But Brady won’t have any problems moving on from Bündchen, the Manhattan Beach mom said.

“Tom will have women throwing themselves at him.”