KUALA LUMPUR, Nov 18 — Former Batu MPs P. Prabakaran and Chua Tian Chang look to have the upper hand as familiar faces to voters, who have the luxury of choosing from a total of 10 candidates in the most tightly-contested parliamentary seat in Malaysia tomorrow.

In an informal poll by Malay Mail at the Sentul Pasar and UTC Sentul area mid-way through the 15th general election (GE15) campaign, Batu voters might be spoilt for choice, but few know the other eight contenders.

The first names — or in some instances only names — that came to mind were Pakatan Harapan’s (PH) Prabakaran, who has just completed his first term in office, and former PKR president Chua — better known as Tian Chua — who served two terms as a PKR MP and is now standing as an independent.

Sheela Tanggaraju speaks to Malay Mail during an interview in Sentul on November 11,2022. — Picture by Firdaus Latif

What voters want in a Batu MP

Batu native Sheela Tanggaraju, 43, who works as an assistant general manager and has voted in four previous elections, suggested that candidates would be evaluated based on their work.

“I think the people should know who has done the most during our difficult time, especially during the MCO where certain places like Selayang were under lockdown. They should know who was there to support them during that period,” she said.

She said that she preferred those political leaders whose service she had already seen: “Seeing is believing, right? Because people can talk but we don’t know what’s the outcome later.”

So far, she has seen Prabakaran in the Batu area: “Not just in walkabouts. I’ve met him in so many events, school activities, even funerals, things like that. Especially in Sri Murni during the pandemic time, they had a total lockdown, so he was the one who was there helping everyone. My sister stays there.”

As for Batu problems that need fixing, she said that the many construction projects had caused a lot of traffic jams and flash floods.

She also highlighted the insufficient parking at Sentul Pasar, especially on weekends, where marketgoers have no choice but to park along the main road and end up getting parking summons. Madam Tan, 63, has lived in Batu for 30 years and voted in every election, saying she will vote again tomorrow as it is her civic responsibility.

She said she only knows Prabakaran and Chua, and would have to read up on the other Batu candidates.

Asked if she will give new faces a chance, she said: “I still don’t know, because I’m a housewife, busy every day, so I don’t have the time to think properly yet. This needs time to think and analyse.”

Saying that she walks to Sentul Pasar from the Sentul Bahagia side, she has observed how the uneven pavements have forced senior citizens to drag their shopping trolleys along the road itself, after a trip to the market.

“Sometimes, I see old people by the roadside where buses and cars pass by. Their movements are slow. It’s dangerous. If the uneven pavements can be repaved, then they can walk safely,” she said.

First-time voter Kavi, 21, said he only knows Prabakaran out of the 10 candidates, saying he had seen the latter helping by distributing food.

He is still thinking about who to vote for tomorrow but will make his choice based on the candidate, and not the party, saying that he wants an MP who is caring and “understands the people’s pain”.

He also hopes for an MP who will ensure Sentul is kept clean and rubbish free, noting his concern about Aedes mosquitoes. 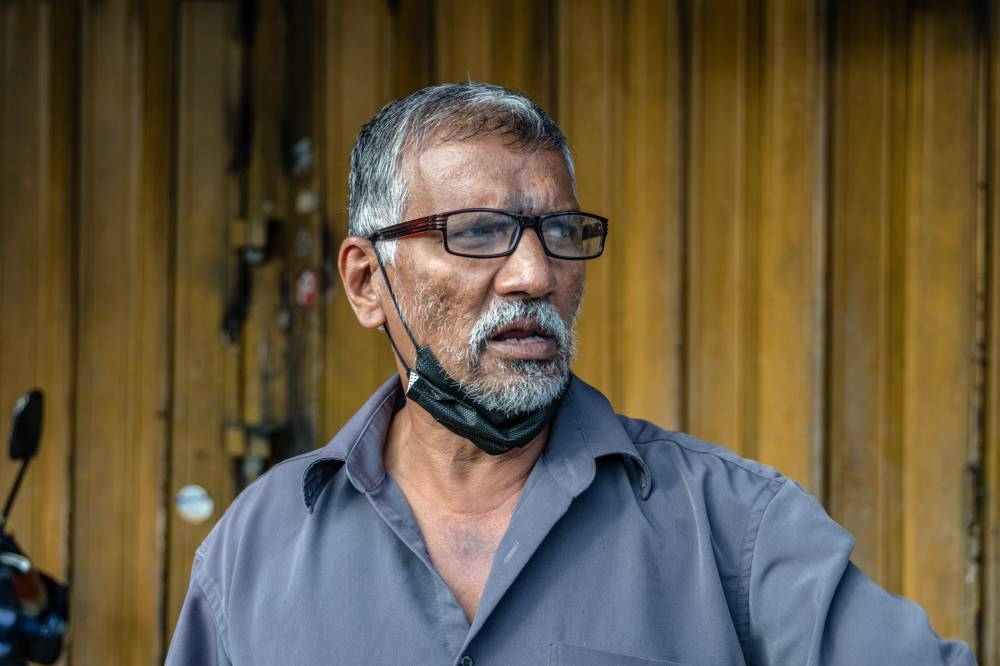 Jayaraman R. Gopal speaks to Malay Mail during an interview in Sentul on November 11,2022. — Picture by Firdaus Latif

Batu native R. Gopal Jayamaran, a taxi driver and part-time worker at a stall selling vadai at the market, has voted in at least four previous elections.

As for the 10 candidates in Batu, he said the number of candidates was not important, as the people he met had already made up their mind.

“That’s why I never care, I don’t care how many people, how many flags. I already made my decision,” the 59-year-old said. Chitra Rengan speaks to Malay Mail during an interview in Sentul on November 11,2022. — Picture by Firdaus Latif

Which comes first: Party or candidate?

Legal secretary Chitra Rengan, 48, who is a Batu resident for 15 years and will be voting for the fourth time tomorrow, expressed scepticism of election candidates.

“Everywhere got problem, nobody can solve it. Whenever the election comes, they will come and give empty promises. It happens everywhere, we are not satisfied with whatever promise they made,” she said.

But despite such disappointments, she stressed the importance of voting, also indicating that this was a chance to get back at those who cheated voters out of the original outcome of the 14th general election by party-hopping.

“No choice, every five years, election, we have to do something. Definitely we will vote for the Opposition, that’s very sure, we want PKR to come, that’s it,” she said.

“Last five years, we vote for the Opposition, what happened? Within two years, they are cheating right, now they come back. We will fight, we will show we definitely vote for Opposition, we don’t want this government.”

Out of the 10 candidates in Batu, she said she only knows four — independent candidate Siti Kasim, Chua, Prabakaran and Parti Warisan Sabah’s P. Naganathan better known as “Nathan Batu”. Azrul Adnan speaks to Malay Mail during an interview in Sentul on November 11,2022. — Picture by Firdaus Latif

So what’s the plan?

Businessman Azrul Adnan, 41, had already voted in two previous elections, but is thinking of not participating this GE15.

“Most probably I’m not voting this year, even for the PAS candidate,” he said.

He explained that he does not like PAS to team up with any other parties as its image would be harmed if its partners make mistakes, saying: “I don’t like PAS joining any party, JV (joint venture) with any party. Better they stand alone like last time, they are strong enough. Their mistake is they JV with other parties, their votes may be reduced, because the damage is not because of them, but because of other parties.”

Azrul knows of Batu candidates Chua, Prabakaran, MIC vide-president Datuk A. Kohilan Pillay and PAS leader Azhar Yahya, who will be contesting for the second time on Perikatan Nasional’s (PN) ticket, as well as Siti Kasim.

For Azrul, there is not a single party that he looks forward to, saying their election campaigns were about things in the past when Malaysians want to know what they have to offer over the next five years.

“Just talking about others’ weaknesses, 1MDB is all stale news, the 1MDB one already jailed, settled, don’t talk about that again. Those manifestos are all promises only, have a detailed plan lah. Like the rumours next year will be worse for everyone, what is your plan, we want to hear that,” he said. Party flags and banners are seen during election campaign in Sentul, Kuala Lumpur on November 11, 2022. — Picture by Firdaus Latif

Not just new faces, but new logos too

When met near the Sri Perak flats, 67-year-old Norsiah Said, said she will be voting for the fourth time tomorrow.

She said she did not know any of the candidates nor that there were even 10 of them, as she had not been paying much attention.

“I only know ‘dacing’,” she said when asked which of the party logos she recognises, referring to the weighing scale logo which BN uses.

She considered PH’s logo to be new and was aware that the area was held by PKR but said she did not know of other parties such as PN and Tun Dr Mahathir Mohamad’s Parti Pejuang Tanah Air when they were highlighted to her. Meanwhile, 64-year-old Alan believes the minimum wage should be increased to RM2,000 without including allowances.

On the other hand, his wife, also 64, who asked not to be named, said the potholes in Batu should be patched up and first jobbers should be offered a 50 per cent discount or zero interest for the federal study loan PTPTN, as many graduates struggle to land jobs.

The couple voted in the past three to four elections, and between them listed Prabakaran, Chua, Kohilan, Azhar and Siti Kasim as those whom they know, adding that they have seen Warisan’s candidate Nathan’s poster but do not know anything about him.

They were able to recognise the party logos in Batu and have already decided on who they will vote for, with their main consideration being the party followed by the candidate.

Alan said: “Both, see who leads the party, then see the candidate. But see the party first, who is the president.”