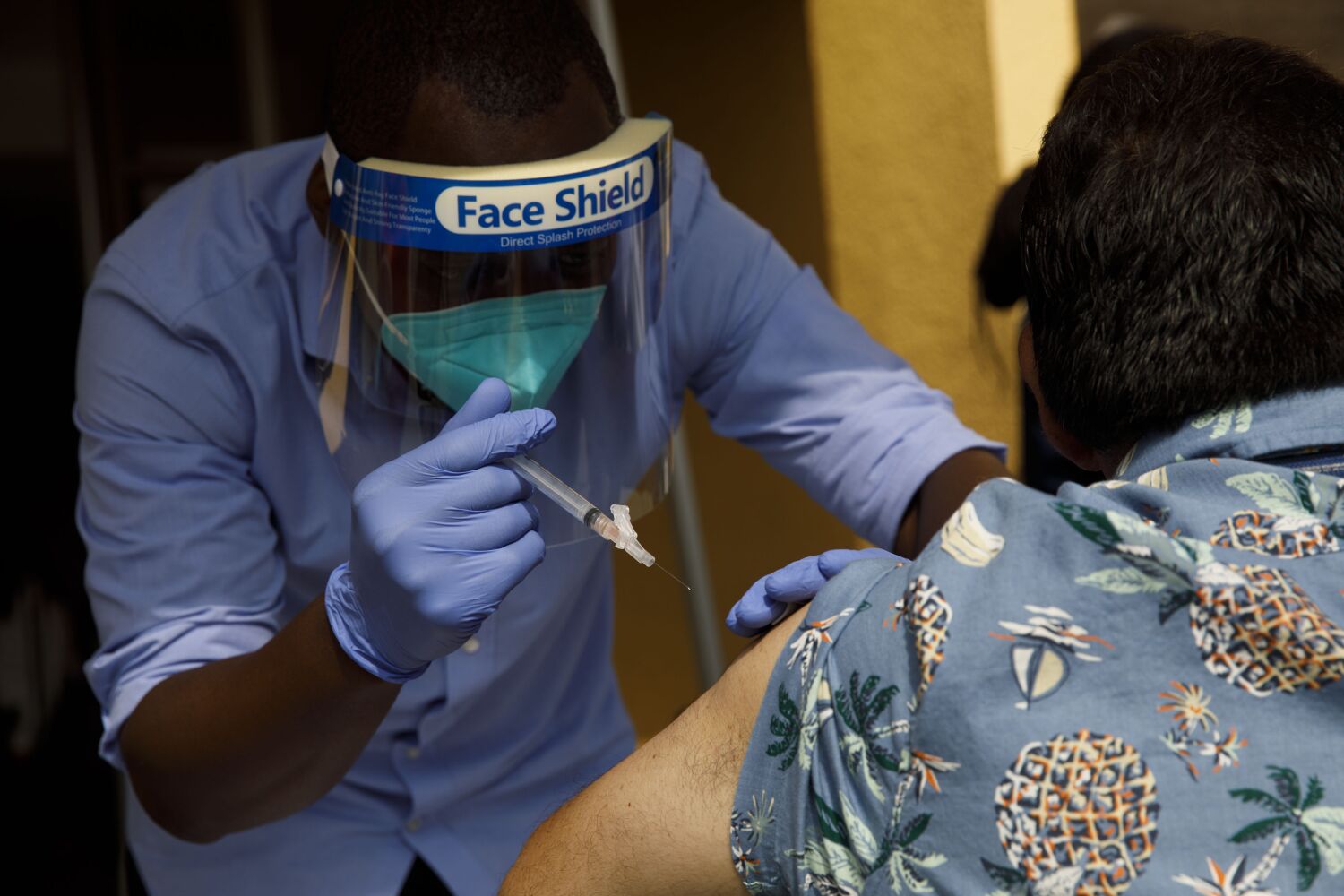 When Sandy Sandoval tries to encourage her family members to get the flu vaccine, they usually tell her that the shot does not work and the vitamins they’re taking are enough to protect them through the season.

But it didn’t deter the 22-year-old from sitting in the appointment room at an AltaMed clinic in Santa Ana earlier this month to get the annual flu shot before going to her job at an Aldi supermarket.

She knows she’s unlikely to persuade her family to get vaccinated, but she says she feels safe and protected. She was even more motivated this time as she watched her co-workers of all ages calling out sick with the flu.

“Everyone’s getting sick,” Sandoval said. “So far I haven’t gotten sick because I’ve been on top of all of my vaccines. I think it works.”

Since October, California has had 17 flu deaths, according to the state Department of Public Health. For weeks, public health officials have been bracing for a sickly winter that includes the alarming early start of flu season, rising COVID-19 cases and a surge of cases of respiratory syncytial virus, known as RSV.

But public health officials are also expressing concern about how communities of color may fare as the flu makes a comeback and whether they can successfully persuade them to get the vaccinated.

Dr. Alexander Rodgers, an associate program director for the family medicine residency at Charles R. Drew University of Medicine and Science in Willowbrook, said the emerging flu season is coming after years of mask mandates and social distancing. Although those policies were in place to ward off COVID-19, he said it also helped prevent flu cases as well.

As he and other providers encourage patients to get the flu vaccine, he said time will tell how bad this year’s cases of the coronavirus and flu will be. Getting people in for their initial COVID-19 shots generally worked, Rodgers said, but getting them to come back in for boosters and other shots has been a challenge.

“I think a lot of people are kind of doing this mental calculus in their mind and saying ‘Well, I got four COVID shots, so do I really need one flu shot?’” said Rodgers. “They’re just saying, ‘I don’t want to do not one more vaccine this year,’ so I’m wondering what the flu vaccine turnout will be.”

In October, the Centers for Disease Control and Prevention found that flu vaccination rates have been “consistently lower” among Black, Hispanic, and American Indian and Alaska Native adults compared with other ethnic groups nationwide since 2010. During the 2021–22 season, 42% of Black adults received a flu shot while 38% of Hispanic adults, and 41% of American Indian and Alaska Native adults did the same. White and Asian adults were vaccinated at 54%.

“Flu vaccines are the best way to protect against flu and its potentially serious complications,” Debra Houry, the CDC’s acting principal deputy director, said in a news release. “Improving access to and trust in flu vaccines among people is critical to help reduce inequities.”

Federal health officials noted in the report that lack of access to healthcare and insurance, missed opportunities to vaccinate, and misinformation and distrust are among the reasons why people of color are less likely to get the flu vaccine.

In addition, chronic health issues that often plague communities of color, such as diabetes, high blood pressure and asthma, increase their risk of flu complications. The report found that people of color were more likely to be hospitalized for severe flu cases.

There were not enough flu cases during the 2020-21 flu season in the United States and globally for the CDC to estimate how many people avoided flu hospitalizations and deaths because they were vaccinated.

Historically, it has been difficult to get people vaccinated for the flu nationwide, and Los Angeles County is no different, said county Public Health Director Barbara Ferrer.

She said this season will be important as influenza cases are expected to rise with the colder months ahead, so public health officials continue to urge people to get their COVID-19 vaccines and flu shots.

For most people, Ferrer said, the problem comes down to time and access, making it important for health providers to offer both vaccines whenever they can. She said the department has worked to have mobile clinics in communities and to make vaccines available for homebound people. It also is working with community-based organizations.

“Our hope is that with the messaging and particularly the threat of having lots of respiratory illness circulating at the same time and having an impact on the healthcare system, people will go ahead and take advantage of easy access [and] good information to get themselves better protected,” Ferrer said.