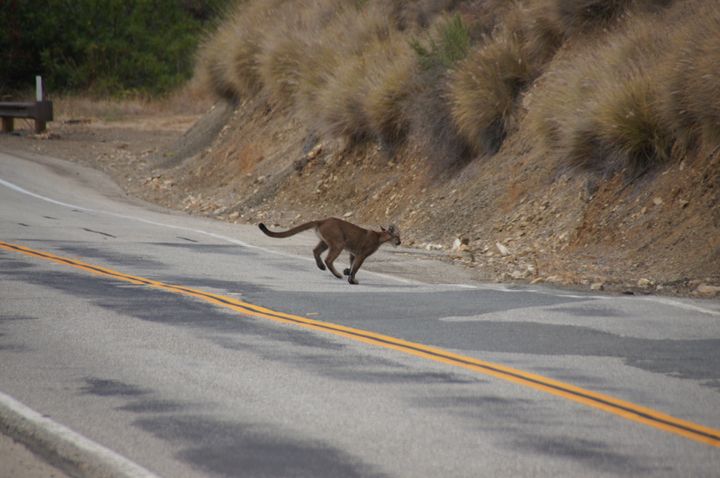 A California mountain lion being tracked by biologists met a violent end last week on the very same road where her mother was killed four years ago.

A vehicle struck and killed the radio-collared female cougar known as P-54 on Las Virgenes Road in the Santa Monica Mountains on Friday, the National Park Service said on social media.

The announcement noted that P-54 was the 29th mountain lion since 2002 to be killed by a vehicle in the scientists’ study area, which includes the Santa Monica Mountains, Simi Hills, Santa Susana Mountains, Verdugo Mountains, and Griffith Park. Ten of the cougars killed have had radio collars.

But P-54’s death was especially poignant in light of the death of her mother, P-23, in 2018. P-23 was struck and killed by a vehicle in January of that year “not too far” from where P-54 died. After her death, animal advocates said the incident illustrated the need for more wildlife crossings over California’s busy highways.

“These big cats are no match for the network of roads, highways, and sprawl that we’ve built with little regard for their impacts on lions or wildlife connectivity,” Center for Biological Diversity attorney J.P. Rose told HuffPost at the time.

P-54 and her sibling were about a year old when their mother was killed, around the early side of the period in which mountain lion kittens typically leave their moms and set out on their own.

Though scientists were at first unsure how the kittens would fare, P-54 grew up and ultimately became a mother herself. However, her first litter of three is believed to have not survived past early kittenhood, and the two cubs in her second litter also met untimely deaths. One of them, known as P-98, was killed by wildlife wardens after attacking a child in the yard of a Los Angeles County home.

And two months ago, her other cub, P-97, was killed in the same manner as his mother and grandmother, though not on the same road, according to the National Park Service. A vehicle fatally struck him on a freeway near Los Angeles’ Getty Center. He was 18 months old.