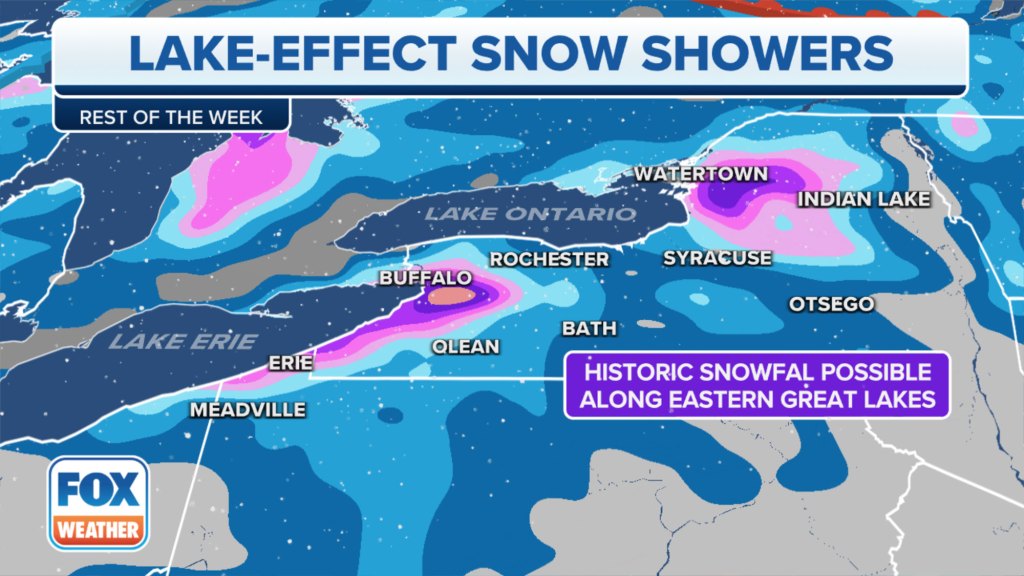 A potentially historic lake effect snowstorm is expected to dump between three to six feet of snow in parts of western and northern New York in the coming days.

Bands of snow have already formed over Lake Ontario and Lake Erie and the precipitation is expected to develop into a prolonged period of “paralyzing snowfall” in the Buffalo and Watertown areas later this week into the weekend, the National Weather Service said.

According to Fox Weather, snow could fall at an incredible pace of 3 inches per hour at times in the most intense snow bands. A rare weather phenomenon known as thundersnow can also occur.

The National Weather Service issued a lake-effect snow warning for the Buffalo area on Wednesday, describing the storm as a “potential high-impact, long-duration lake snow event.”

Snow is expected to continue falling well into Sunday, when the Buffalo Bills are scheduled to host the Cleveland Browns at Highmark Stadium in Orchard Park. The team practiced indoors Wednesday and has been communicating with the NFL about possibly delaying or moving the game, coach Sean McDermott said.

AccuWeather meteorologist Matt Benz said that the major snowstorm this early in the season can be attributed to the relatively warm lake water temperatures, which can contribute more moisture when cold air moves overhead. As of Tuesday morning, water temperatures in the Great Lakes were still in the 50s.

“The heaviest snowfall is expected to occur downwind of Lake Erie and Lake Ontario in New York and Lake Huron in Ontario. Several feet of snow can occur where snow bands persist over the same location for an extended period of time,” Benz said.

The worst conditions are expected over two periods: Thursday night into Friday and then Saturday into Saturday night, Benz said.

“Buffalo and its southern suburbs may receive as much as 3 to 6 feet of snow by Sunday,” Benz said.

Meteorologists are keeping a close eye on the winds as well, as even a small shift in the wind direction can cause one of the intense snowbands to move either north or south, AccuWeather reported.

Responders are preparing for the worst, including roof collapses from the weight of the snow and downed power lines.

The Buffalo NWS office noted the lake effect snow setup is similar to the historic November 2014 snowstorm dubbed “Snowvember,” during which six feet of snow was recorded in Buffalo.