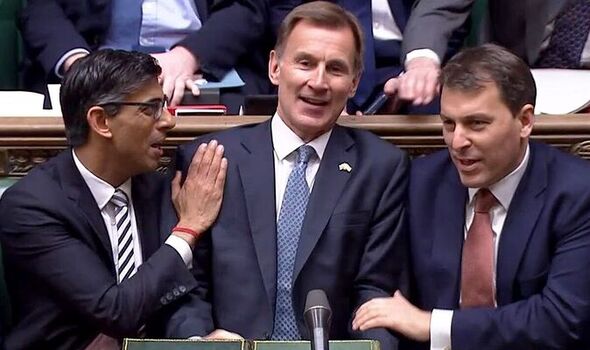 Jeremy Hunt outlined a devastating £55billion plan for tax hikes and public spending cuts as he warned Britain must “face into the storm” to get the economy growing again. Delivering his Autumn Statement in the House of Commons the Chancellor warned the independent Office for Budget Responsibility (OBR) indicated the UK is already in recession.

“UK, like other countries, is now in recession. Overall this year, the economy is still forecast to grow by 4.2 percent,” he said.

Striking a businesslike tone Mr Hunt told MPs today he would take a three-pronged approach to “tackle the cost-of-living crisis” and “rebuild our economy”.

He promised “stability, growth and public services” would be his priorities and the Government would look after the most vulnerable in society.

Jeremy Hunt vowed to get the UK economy back on track (Image: PARLIAMENT.TV)

In a victory for the Express, the Chancellor pledged to maintain the state pension triple lock, as well as to increase the benefits in line with inflation, and to maintain support for those struggling with energy bills.

However, his plans will also see Britons forced to pay more in taxes “but those with the broadest shoulders” paying the most.

In total, Mr Hunt set out a package of around £30billion in spending cuts and £24billion in tax rises over the next five years.

Blaming the Conservative party for the economic crisis, Labour’s Rachel Reeves accused the Government of having “forced our economy into a doom loop where low growth leads to higher taxes, lower investments and squeezed wages”.

But defending the plans set out by his predecessor two months ago, Mr Hunt said: “I understand the motivation of my predecessor’s mini-budget and he was correct to identify growth as a priority. But unfunded tax cuts are as risky as unfunded spending.”

He added: “We want low taxes and sound money. But sound money has to come first because inflation eats away at the pound in people’s pockets even more insidiously than taxes.

“So, with just under half of the £55 billion consolidation coming from tax, and just over half from spending, this is a balanced plan for stability.”

Speaking for almost an hour in the House of Commons, Mr Hunt’s main announcements included:

Just days after Mr Sunak entered No10, there were fears he was ready to ditch the Tory party’s 2019 manifesto pledge of increasing the state pension each year by the highest out of inflation, average earnings or 2.5 percent.

However, after more than 300,000 people joined an Express crusade to force the Government to stick by its promise Mr Hunt today confirmed the triple lock would remain in place.

“the cost-of-living crisis is harming all pensioners,” he told MPs.

“Because we have taken difficult decisions elsewhere in this statement, I can today announce that we will fulfil our pledge to the country to protect the pensions triple-lock.”

2) Benefits to rise with inflation

For weeks Tory backbenchers have been vocal in demanding the government commit to increasing benefits in line with inflation.

The issue was first raised when Ms Truss was still at the helm, with dozens of party’s MPs warning they were facing electoral disaster if they did not look after those most in need.

Bowing to the pressure, Mr Hunt said: “Today I also commit to uprate such benefits by inflation with an increase of 10.1 percnet, that is an expensive commitment costing £11billion.

“But it means 10 million working-age families will see a much-needed increase next year.

“On average, a family on universal credit will benefit next year by around £600. And to increase the number of households who can benefit from this decision I will also increase the benefit cap with inflation next year.”

He added extra resources would be put in to help get more people off universal credit, with 600,000 more claimants required to meet a “work coach” once a week.

6) Fast-tracked regulation reforms to make the most of Brexit