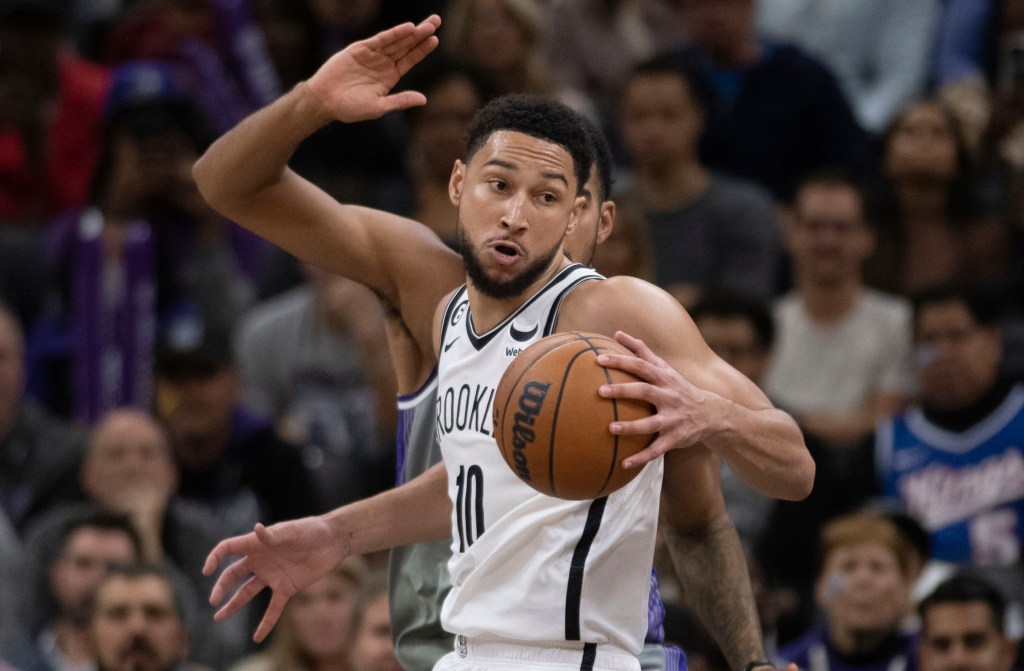 PORTLAND, Ore. — Since Ben Simmons arrived in Brooklyn — at the cost of three-time NBA scoring champ James Harden — he has either played poorly or not at all.

His struggles — first to get on the court, then to stay, or have success, on it — have been a glaring concern for the Nets since they acquired him last season. And they continue to be, with some in the organization privately grumbling even more at his absences and poor play in the past weeks than they did upon his arrival.

The hope was that not playing due to mental-health issues and a bad back (essentially taking a redshirt year) would help Simmons return to form. But after surgery for a herniated disk, he’s still missing games and minus his explosiveness, a 26-year-old three-time All-Star now relegated to coming off the bench.

The Nets, who will end their road trip against the Trail Blazers on Thursday coming off consecutive blowout losses, have had plenty of blame to go around for their underachieving start. They held a players-only meeting Oct. 29 after losing at home to Indiana. Among the several topics discussed and concerns aired was Simmons.

“It was honest. We had a conversation that obviously I’m not going to talk about, but it was honest,” Simmons said at the time. “That’s what winning teams do, hold each other accountable. Be open and talk to your teammates and respect that.”

The Athletic has reported that Markieff Morris spoke up, saying the Nets need Simmons to succeed and that he has to respond when he deals with adversity on the court. The report also claimed Simmons appeared to take the critique in stride, and was responsive and attentive throughout.

“I don’t want to get into any discussions that happen in the locker room. We keep that between us,” Kevin Durant said of the report.

At the time, Morris said: “I don’t speak on players-only meetings. I don’t even know why you guys even know about that. That’s something that’s between us. That’s our thing.” On Wednesday, he flatly denied the story in The Athletic.

“Who’s the source? Y’all gotta chill with these false stories man!” Morris tweeted. “Let me and my guys hoop!”

Precisely who spoke up at the meeting and exactly what they said may be more of a micro-concern. The macro issue is Simmons, both for his poor play (averages of 5.8 points, 6.1 rebounds and 5.6 assists in 26.6 minutes, all career-lows) and for the same concerns about his passion that dogged him in Philadelphia.

Simmons has been playing through pain. His back had nerve damage that he estimates will take 18 months to heal. That brought on a swollen knee that has already cost him five games, has been drained and, he told The Athletic, required PRP injections.

And none of that even considers his psyche.

Simmons, who has seen a therapist in the past, is in the third season of a five-year, $177 million deal. Durant already has requested a trade once and Kyrie Irving will be a free agent, so Simmons could outlast both in Brooklyn, so getting him and keeping him in the right headspace is paramount.

“The big piece of that is the group still having confidence in him — which we do — and then putting him in positions to have success,” said coach Jacque Vaughn, who has moved Simmons from starting point guard to backup center. “Defensively, do what you do. And that starts with playing hard. … But our ongoing conversations to try to make him feel comfortable as a basketball player, that’s my challenge.”

Ironically, it was in Tuesday’s 153-121 humiliation in Sacramento that Simmons had his first remotely promising game of the season. His 11 points were the most he’d scored since June 14, 2021. He shot 5 of 7 — throwing down a lob — grabbed five boards and handed out three assists.