MELAKA, Nov 17 — The once-busy Jonker Walk is no longer abuzz with tourists. Most of the souvenir shops, food and beverages shops have been dependent on festive holidays as that is the time when the street is filled with Malaysian tourists, a local cafe owner said.

“We rarely get tourists from abroad now. There are some, but not as many as before Covid-19 hit the country.

“During the weekdays, it’s so quiet you can hear only your own footsteps if you take a stroll on Jonker Walk.

“So are the streets parallel to it. You can tell there is a huge drop in tourist count when you can actually get parking on the street in town,” said the cafe owner who only wanted to be known as Choong.

The town needs a rejuvenation exercise, she said adding that there hasn’t been one for a long time.

Nothing lasts forever, especially if it is the centre of attraction for visitors from all over.

“Since the ‘blue flag’ took over, nothing is ever fixed here. If you ask me who should be in government, I’ll give you an example.

“Just look at that (pointing at an electric cable that is dangling). I’ve asked them to fix it since two months ago, but till today no one is here.

Reminiscing about the time when PH was in office, Choong said the folks in Melaka miss the former chief minister, who is also Melaka PH chief, Adly Zahari.

According to the 50-year-old, Adly is always around when needed, he’s easy to contact.

“Never mind that he may not be chief minister again, we all have his back.

“He is a nice man, who here doesn’t know that?” she said adding that voters in Hang Tuah Jaya and Kota Melaka will never vote for BN.

“This area (Ayer Molek) has always been a BN stronghold. Let’s see if they manage to convince the voters there this time,” she said.

As for Aishah Aimee, 40, she said the competition is very strong in Masjid Tanah, a BN stronghold, but the seat is contested under the Perikatan Nasional (PN) ticket by Datuk Mas Ermieyati Samsudin.

Mas Ermieyati who is the incumbent MP of Masjid Tanah left Umno after BN lost the 2018 general election. She remained an independent candidate before joining Bersatu in the same year.

She was later appointed as Higher Education Minister under the PN administration and later on, she became deputy minister in the prime minister’s department under the law minister.

The PN administration was formed after Bersatu left PH in 2020, leading to the Sheraton Move.

The term ‘Sheraton Move’ came about in late February 2020 when political defections caused the collapse of the PH government.

The collapse led to PN coming to power unelected before the coalition was forced to yield last year to BN which was voted out in the 14th general election.

“I don’t think she will lose the people’s support,” said Aishah when met in Ayer Keroh.

Amilia Rasidi, 36 said between the candidates contesting in Masjid Tanah, she only knew Mas Ermieyati.

However, Amilia said being present on the ground isn’t enough, there were many education-related issues that she did not fix when she was the higher education minister.

“It might not affect me, but education still isn’t fairly benefited by all races in the country.

“What is she doing now?” Amilia asked.

Over, in Alor Gajah, the owner of a local eatery who only wanted to be known as Amir said Melaka will do better without BN.

A former Umno member, who wanted to remain anonymous said he left as he was not comfortable with the party’s ways.

“Even the party constitution, in a way indirectly causes divisions among members.

“It’s not written in black and white, but there are some rules which you have to follow and when you do, you are bound to be stuck with a division and can’t switch if you’re unhappy later.

“Moreover, there was too much money politics. When I experienced it first hand, I told myself that I had to get out,” the eatery owner said when met in Alor Gajah.

He added that he had joined Umno to help people who are needy, but he was not comfortable after seeing how things were done and it often involved money.

“PH did well when they were government, why not let them stay on longer? There were some development plans, but they were halted when BN took over.

“People in Alor Gajah are very peaceful people who don’t like politicians fighting against each other.

“I don’t even agree with all these campaign materials, I think it’s a waste when they could have channelled funds to help those who are affected by the Covid-19 pandemic.

“I will still go out and vote, that’s my responsibility,” he said in hopes of better days and for PH to regain the government.

The Alor Gajah seat was once held by the late Tun Abdul Ghafar Baba from 1974 to 1978 when the seat was known as Malacca Utara.

Alor Gajah is a mixed seat of 62.7 per cent Malay voters, 23.8 per cent Chinese, 12.9 per cent Indian and 2 per cent are made of other ethnicities. 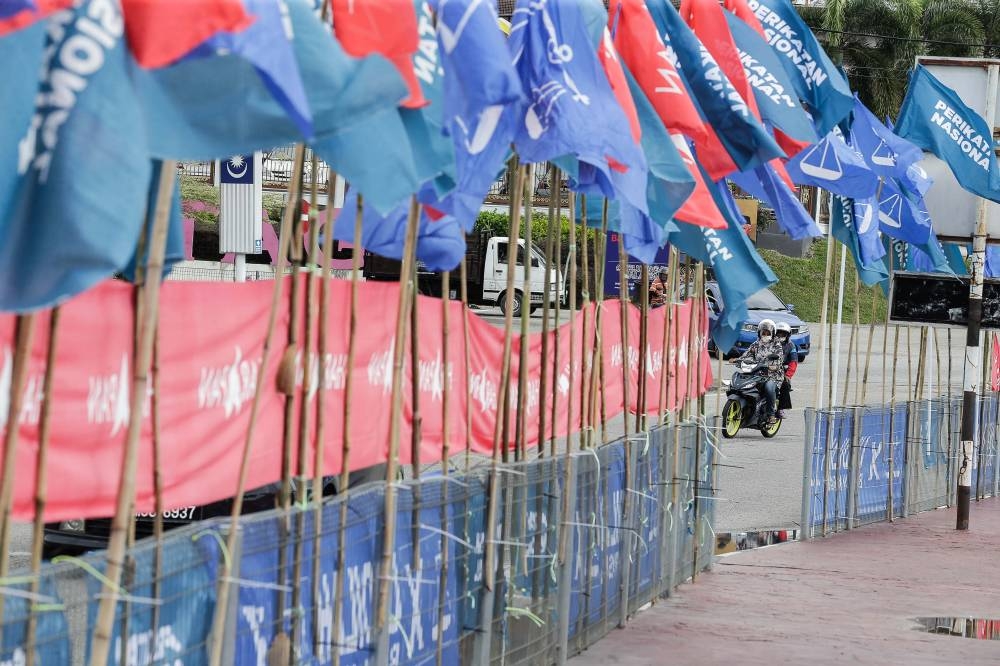 “Honestly, I’m not familiar with Shahril. I only heard that he’s not a local boy. I think it will be a tough fight against the former MB who does have quite a positive support here,” the eatery owner added.

A second-time voter, who only wanted to be known as Jeff said out of all the candidates, he has only heard of Adly and Mohd Redzuan.

“But, I haven’t seen the PN guy (Mohd Redzuan) much around here. If you didn’t mention him, I’d have forgotten he actually is contesting for the GE15,” said Jeff.

Melaka will also see two other parliamentary constituencies contested in the GE15, and they are Tangga Batu and Jasin.

The Alor Gajah and Masjid Tanah seats are now under the PN coalition.